Confident, determined and smart, Jessica Nicole Harlee pushes herself on and off the basketball court. A junior at West Virginia University, Harlee embodies the gentle spirit of Arthur Ashe as a calm leader with impeccable focus on her studies and helping her team to victory. “She has done a great job,” Women’s Basketball Head Coach Mike Carey says about Harlee, who plays forward and guard.

“She brings a lot of energy, great leadership and work ethic. Whatever she does, she does it 110 percent. I’m not surprised that she would win the Arthur Ashe award.”

Carey recruited her from Fallston High School in Maryland, where Harlee maintained a 3.9 GPA and was a four-time all-county, two-time all-metro, and 2009 Baltimore Sun All-Metro first team selection.

“Everyone who sees her is amazed by her defense,” says Stephanie White, assistant director of student-athlete academic services. “She has one focus. She sees the ball and will do whatever she has to do to get it. It’s crazy to see the determination in her eyes wherever the ball is. It’s fun to watch.”

During her time at West Virginia University during 2011-2012, Harlee led WVU with 65 steals and recorded a career-best seven steals, helping WVU to 27 team steals against North Carolina Central, the most team steals in a single game under Carey. Harlee played in all 34 games, earning 32 starts and averaging 26.6 minutes per game, the second most on the team. She recorded the third most team assists with 67, and averaged 5.1 points per game and 5.4 rebounds per game. She is currently recovering from an injury.

Harlee has also risen to the top as a leader. “She was co-captain in her sophomore year — and that just doesn’t happen,” White says.“It tells a lot about her leadership. She is also co-captain this year.”

White says she has grown to depend upon Harlee, who helps her schedule open gym time and keeps her posted on the team’s arrival from away games. “She’s there if the team needs something. We depend on her,” White says. “It’s nice to have her. Some of the girls look up to her on how motivated she is. She reminds them that they are not only here to play basketball, but to get a degree.”

Harlee practices what she preaches by maintaining a 3.9 GPA in industrial engineering, studying and doing everything she can to help the team win.

“One of my proudest moments was when we beat Notre Dame last year on their home court in front of 10,000 fans,” Harlee says. “It was one of the best moments of my life.”

Harlee is a student member of the Institute of Industrial Engineers, the Student Athletic Advisory Committee and Alpha Phi Mu, the industrial engineering honor society. She has made the President’s List and Dean’s List consecutively since 2010, and was awarded WVU’s Sophomore Industrial Engineering Student of the Year award.

“My parents always expected me to get good grades,” Harlee says. “I was never rewarded for doing what was expected of me.”

While academically gifted, Harlee credits the university’s support of scholar-athletes and the assistance of people such as White. She meets with White or someone on her staff 2-3 times per week to review academics, get tutoring or to do homework.

The 20-year-old beams with pride as she describes her family support.  She hails from an athletic family, where her mother, father and sister all were involved in sports at some point. Harlee’s father wrestled in high school, her mother ran track at Towson University, and her sister played soccer. Everyone in the family stands between 5 feet 9 inches and 6 feet 3 inches.

“My mom is my role model and my number one supporter,” Harlee says. “She comes to every home game and drives three and a half hours to see me play.”

When she isn’t studying or supporting her team, she also believes in giving back. Harlee has been involved in the Angel Tree Project, where she takes less fortunate children Christmas shopping; has been involved in the Adopt a Grandparent Program; visits the Ruby Memorial Children’s Hospital; and attends elementary school reading events, as well as the Girl Scout’s Adopt-A-Player Program.

But she says she is humbled by the award acknowledgement.

“The Arthur Ashe award means a lot,” Harlee says. “I appreciate that people recognize the hard work I’ve put into it. It does add an extra responsibility, understanding who the award is named after.” 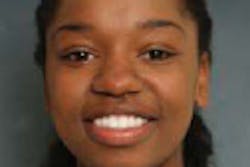 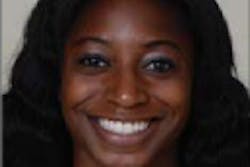 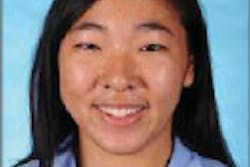 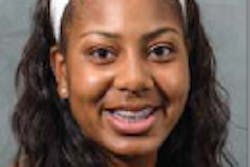