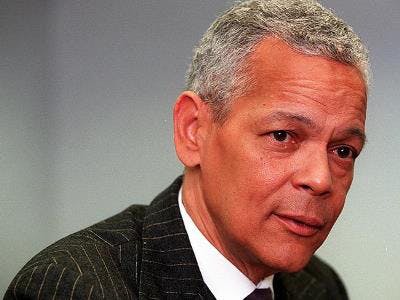 If anyone knew the importance of a college education, it was Julian Bond.

Bond, who died Saturday night at age 75 after a brief illness, grew up on a college campus.

In 1945, his father, Dr. Horace Mann Bond, became the first Black president of Lincoln University, a historically Black college in Pennsylvania, relocating his family, including 5-year-old Julian, from Georgia to the rural HBCU campus about 50 miles outside Philadelphia.

But it was Bond’s role as a young organizer with the Student Nonviolent Coordinating Committee (SNCC) that solidified his presence within the burgeoning Civil Rights Movement of the 1960s and catapulted him to national fame. He served as the communications director for SNCC and played a critical role in organizing voter registration drives and protesting Jim Crow laws throughout the American South.

Although he dropped out of Morehouse College, Bond later returned and earned a degree in English in 1971, the same year that he co-founded the Southern Poverty Law Center, a nonprofit that combats hate, intolerance and discrimination through education and litigation.

It was 50 years ago that Bond won his first run for office and was elected to the Georgia House of Representatives. But his fellow legislators voted 184-12 not to seat him because he had publicly supported SNCC’s policy in opposing U.S. involvement in the Vietnam war. It took a U.S. Supreme Court decision to overturn the legislators’ actions, and he later went on to serve in the Georgia State Senate until 1987.

By the late 1980s, Bond was seemingly everywhere. He was hosting the public service talk show America’s Black Forum, writing a nationally syndicated newspaper column and narrating the popular PBS series Eyes on the Prize. He served as a videoconference moderator for Black Issues In Higher Education, the predecessor to Diverse: Issues In Higher Education. He was also popular on the campus lecture circuit and taught at several institutions, including Drexel University, Harvard and the University of Pennsylvania.

He spent 20 years as a professor of history at the University of Virginia and American University, where he taught courses drawing on his first-hand knowledge of the Civil Rights Movement. His classes were some of the most popular on campus.

I was fortunate to take one of his classes in the 1990s. I was a senior at Georgetown University, and Bond—who had just been elected chairman of the NAACP—was teaching a weekly course at American University. I traveled across town once a week and was treated to a rare history lesson about the movement from someone who was an active participant.

More important than the lectures themselves, I got the chance to learn about Bond during his regular 30-minute break sessions. He would head outdoors to smoke a cigarette, and I would be close behind quizzing him about everything from the Civil Rights Movement to Black political leadership.

Bond quickly became a mentor, and, when I began my career as a reporter, he became a valued source. When I decided to pursue a Ph.D. in Afro-American Studies at the University of Massachusetts, Amherst many years later, it was Bond who agreed to write my reference letter.

He loved his students and they loved him, too.

In a February 22, 2012 Diverse article about civil rights leaders who decided to become college professors, Bond—who retired that year—was confident but not cocky when he told me: “I hold my own” in the classroom despite the fact that he was the only full-time faculty member in the Department of History at the University of Virginia who did not hold a Ph.D.

In a similar article that I authored for Diverse in 2008 about former politicians who consider transitioning to the college classroom Bond offered this piece of sage advice: “Surely they’ll bring great expertise if their teaching is about what they know best—serving in office and running for office,” he said. “But after a class or two, as was true with me, their students forget who they were and want them to become knowledgeable informative instructors.”

Over his lifetime, Bond mentored a legion of young folks, including Benjamin Todd Jealous, the former president of the NAACP, and Roslyn Brock, who replaced him as chairman of the 64-member Board of Directors.

Fortunately, I got the chance to see Bond and his lovely wife, Pamela, just a few weeks ago at the NAACP Convention. He invited me to a screening of a new documentary about Julius Rosenwald, the Chicago philanthropist who partnered with Booker T. Washington to build 5,400 Southern schools in African-American communities in the early 1900s during the Jim Crow era.

“You know who he is, right?” Bond queried.

“Of course,” I smiled, as we hugged. “I first learned about him in your class.”

Ironically, we talked again just last week. I was finishing up a profile story on Cornel William Brooks, the current president of the NAACP, and I asked Bond for his thoughts on Brook’s tenure one year into the job.

Certainly the same can be said about Professor Julian Bond.

Jamal Eric Watson is a senior staff writer for Diverse: Issues in Higher Education. You can reach him at jwatson1@diverseeducation.com. You can follow him on twitter @jamalericwatson