Veteran Derek Auguste was well versed in being a soldier in the U.S. Army. But being a student was an entirely different beast. 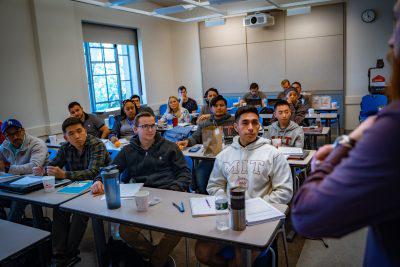 “My experience of higher education was difficult,” said Auguste, who enrolled at the University of Miami in his late 30s. “It just felt like it was so much effort and work and I was so anxious because I was afraid that I was going to fall behind and things of that nature. And that’s how I did college before I did this program.”

The program Auguste is referring to is the Warrior-Scholar Project (WSP), a D.C.-based non-profit that helps active-duty and veteran students pursue or transition into higher education.

Every summer, the organization runs 1- to 2-week “bootcamps” for these students – hosted at a number of U.S. colleges and universities – wherein it teaches them various skills – such as academic reading, writing and studying – and helps accustom them to the typical college environment.

“During these immersive experiences, the veterans are able to basically get a dry run at what it would be like to be at a college campus,” said WSP Program Manager Dilia Introini, a veteran Marine who attended the program in 2016 at age 31.

In those one to two weeks, applicants admitted to the program are placed in cohorts of approximately 15 to 22 fellow military-affiliated students and attend classes at host institutions.

“All they were responsible for was to get there. Whether they have to fly or drive, that was entirely up to them,” said Auguste, who is now WSP’s alumni engagement & outreach fellow. “But once they arrived on campus, everything for that week was covered and paid for by Warrior-Scholar Project, so tuition, books, room and board, meals for that entire week were provided for by Warrior-Scholar Project.”

Education and the college experience

WSP offer three distinct branches of programs, one for humanities, one for STEM and one for business, each with their own version of the curriculum. The curriculums are determined by WSP and are taught by volunteer faculty from the host institutions.

“It’s more than just the academic skills,” Auguste said. “It’s also the transition skills, the coping skills and those intangible things that you learn outside the classroom that WSP does a really great job of teaching you as well.” 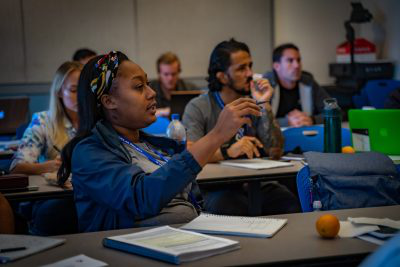 Introini said that WSP tries to make the college experience as realistic as possible for the students.

“We would never want to have a course with only Marines, because that’s not realistic. You’re not going to go to a college campus and be with 14 other Marines,” Introini said. “So we want to make sure that we keep a very diverse cohort to ensure that it translates nicely to the real college campus. In college campuses, you’re going to meet people from very different walks of life, from different backgrounds, different religious beliefs.”

Nearly 83% of students were male and 16% female. Students were not asked whether they identified with the LGBTQ+ community but will be asked for the coming application cycle, said Camilla Hill, WSP diversity and inclusion coordinator.

Like everything else, WSP has been affected by the ongoing COVID-19 pandemic. Instead of in-person instruction at host universities, this past summer’s programs all took place virtually.

Auguste said that given “the success and the overwhelming experience” of the virtual programming this summer, WSP will be holding a STEM course this December for the first time as well.

Applications for both December and next summer are now open.

“It was always a goal of mine to get my bachelor’s degree,” Auguste said.

Getting out of the military in 2015, Auguste was later accepted into University of Miami – his dream school – and studied political science there for two years, during which he struggled in his transition.

Eventually, a fellow veteran told him about WSP and Auguste jumped at the opportunity, attending as part of WSP’s 2019 Harvard cohort. There, he built the confidence he needed to handle academia.

“Going into my senior year, I felt more prepared than I have ever felt before to really kind of just make it a stellar year,” Auguste said. “And for me, what I noticed, it wasn’t so much the academic success that I was having and my relationship with my academics. It was the freedom to know that my academics was under control, which gave me the ability to get involved in extra-curricular activities on campus and really have an awesome college experience, which is something that I missed by joining the military.

“And that’s something I had always wanted to experience. I just didn’t think it was possible, obviously being twice the age of my classmates and my colleagues. Looking more like a professor than a student, I didn’t think I could have that college experience.

Warrior-Scholar Project boasted his academic confidence and he graduated from University of Miami this past spring at the age of 38.

Meanwhile, Introini – who transitioned to higher education in 2013 after 11 years in the Marine Corps – had been overwhelmed as a Columbia University sophomore. But WSP changed that.

She went on to earn her bachelor’s in psychology and her master’s in organizational psychology there.

“It really was a game changer for me personally,” she said. “I had been out of school for 11 years, since I had been in high school. And it turns out that I didn’t really know how to study properly or effectively. I was working harder instead of smarter. So, really going through that humanities program at Harvard in 2016 gave me a lot of new perspectives and a lot of new skills that I was able to bring back to campus.

She graduated with honors and then went on to pursue a master’s degree with the full realization that she could “do this. It’s not supposed to be as hard as it was.”