Hampton U. President Harvey Sharing His Principles for Leadership

For 30 years, Dr. William Harvey has managed to turn heads of peers in higher education and others as he has successfully navigated Hampton University, the private Virginia liberal arts college, from near closure when he first took over, through high and low economic and political tides to its status today as among the better-endowed, well-respected institutions of higher education. 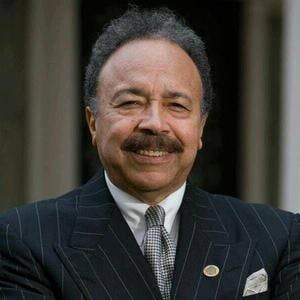 In the process, Harvey, an Alabama native who often reminisces about lessons learned from his parents, has become financially successful, looked to by every U.S. president since the 1970s, and emerged as a mentor to half a dozen educators who eventually became presidents of peer institutions of higher learning.

Now, the 75-year-old higher education icon has pulled together the core of his leadership strategy in his first book, set for release early next year. “Leadership: The Harvey Leadership Model,” is a 200-page-plus nonfiction that lays out what Harvey says are management and leadership principles he feels new and aspiring institution presidents and leaders in other industries can use to keep their ships afloat.

Far from being a tic-tock, tell-all book, the straight-laced manuscript, written in non-academic fashion, is laced with advice, anecdotes and tips Harvey said, in a telephone interview this week, are based on working principles that stem from his childhood and still guide him today.

“When I was interviewed for this job, I told the people I’d run this institution like a business for educational objectives,” said Harvey, who prides himself on being a fiscal conservative. “This is simple. People make it complicated.”

Among the “simple” principles drawn upon are words of advice from his mother and father about going to the neighborhood grocery. “If the money isn’t there, you can’t do it,” his parents would tell him. “If you only have a dollar you can’t go to the store and spend $1.25,” he recalls them telling him. “It stuck to my guts,” he said.

Indeed, that working principle has drawn Harvey disgust over the years from professors and others who feel he has held the institution’s purse strings too tightly at times. Concerns respected, he said, adding Hampton today has a $250 million endowment to help the institution sustain itself during hard times as the impact of the 2008 national recession hit higher education and ingers today. That kind of reserve also helps Hampton pursue new ventures it sees as helping it exist and grow.

The core of Harvey’s leadership book is 10 well-defined chapters setting forth his principles. They range from the need for leaders to have a vision, a work ethic, build teams to achieve tasks, operate as a fiscal conservative, be innovative, have courage and be fair.

“Leadership is the essential element in the success of any entity,” Harvey writes in introducing readers to his book. Whether positive or negative “leadership makes a difference,” he writes.

Harvey, who turns 76 next month, says the end of his tenure as chairman of the White House Initiative on Historically Black Colleges after eight years in this one-time influential volunteer advisory position, won’t diminish his pursuit of what he loves.

“I don’t need to hitch my star to the White House,” he says, noting he has respectfully and honorably served every U.S. president since the 1980s and was a dinner guest this month with President-elect Donald Trump. “I’m a staunch advocate for HBCUs. My principles are my principles.”