Jorden Smith, a junior volleyball star at Johnson & Wales, led all men's volleyball players in blocks per game (3.5) in 2010 and was second in total blocks (189). He received the Best Defensive Player award and was an all-conference honorable mention. The criminal justice major holds a 3.68 GPA, is a camp counselor, a volunteer high school coach and volunteers for the Salvation Army during the holidays. 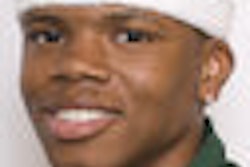