Softball, a love of learning and an extremely competitive spirit runs in Chelsea Garcia’s family. After choosing softball over ballet, jazz and tap dance, Garcia credits her father for her wins and her mother for her academic discipline.

“Being a scholar-athlete means giving your all,” Garcia said. “I’ve been given this opportunity to come to a great university and play a sport. Some people don’t get the opportunity to go to college. I want to do a great job to represent my family and my college on and off the field.”

The Oklahoma State University senior is known for a humble spirit, dogged determination, and a love of learning. The 22-year-old admits that the road to success has required a lot of discipline.

“It’s been hard,” she said. “My freshman year, I wanted to go home. I stuck it out, and the last four years have changed my life. I’ve met great people along the way, and I’ve taken advantage of the resources.”

When the team was on the road, Garcia still can be found hitting her books whenever she was not playing softball to ensure that she maintained her 3.9 GPA. She majored in both secondary education/mathematics and Spanish. “I stud[ied] on the bus when we [were] not joking around and for about three hours before bed, and every chance I [got]. During the fall when we [were] not in season, I [went] home to visit my family, who are an hour away, as often as possible.”

Her impressive Cowgirl resume includes starting every game of her four-year career at shortstop. Her .292 career batting average ranks 24th in the school’s history, her .468 slugging percentage ranks 14th in the Cowgirl record books, while her .360 on-base percentage ranks 20th, and she is 22nd on the all-time career at-bats list with 487.

Garcia hit her second career grand slam with one out in the seventh inning at Tulsa, propelling the Cowgirls to a 7-3 victory. In addition, she has also had a game-winning RBI against Arkansas-Pine Bluff. She collected her 100th career RBI in the win against Kansas and is the sixth Cowgirl in school history to reach that milestone.

A native of Moore, Okla., Garcia says her mother, Robin, influenced her appreciation of a good education, which had a major impact on her life. “My mother was my fourth-grade teacher before she passed away,” Garcia said. “I’m the spitting image of her. She changed lives. She was hard on me, but I learned a lot. She made learning fun and interesting. During the second semester she started getting sick, and I helped out a lot with the substitute teacher. I was glad I was there to help.”

Since Chelsea was 10, her father Tanilo had the job of raising four girls. Garcia reflects on his determination to have her be the best on the field and in everything that she did.

“My dad is a full Mexican and was a good baseball player,” she said. “His parents were migrant workers who couldn’t afford for him to play on teams in his younger years. My mom and dad played on co-ed teams with their work. My dad was my coach throughout my teenage years. I cried if he yelled or even looked at me. He was probably the hardest coach I’ve ever had. But I go back to him and thank him for being so hard on me. It prepared me.”

His support continues with her father driving as much as 15 hours to see his daughter play. “During the season, my dad comes to every game,” she said. “He is dedicated. I always spot him; he wears a sombrero cowboy hat all the time. My teammates think he’s cool.”

Garcia plans to follow in her mother’s footsteps of becoming a teacher in an urban area to pass on the lessons that she has learned. “The way I was raised, they didn’t accept less than 110 percent. They taught me to give it my all and to be persistent.”

She acknowledges that her life lessons continued in softball at OSU. “Ironically, I picked the sport where you fail a lot more than you succeed. In softball and baseball, you get up to bat and hit only three out of 10 times. Seven out of 10 you are not getting a hit.”

Beyond the field, Garcia gives back to the community by preparing packages for families during Thanksgiving and Christmas. As a part of her church’s outreach, Garcia has worked with inner-city children in a Christian sports camp. She also is involved in the student athlete advisory committee.

“I know if I work hard now, it will benefit my future and benefit my students and someone else down the line.” 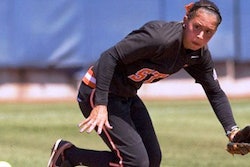