Hau’oli Kikaha, a defensive end for the University of Washington’s football team, started in every game during the 2013 season, finishing with 13.0 sacks, just 1.5 sacks shy of the Husky record. He was the defensive
MVP in the Fight Hunger Bowl, tallying three quarterback sacks, a forced fumble and nine total tackles.  Kikaha spent the summer of 2013 studying in Tahiti. 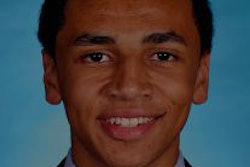