Andraya Carter, a player and leader at one of the most revered programs in women’s basketball, demonstrates a commitment to excellence on and off the court as well as a desire to forge genuine connections.

Even at age 7, Andraya Carter knew she wanted to be a Tennessee Lady Volunteer. She grew up admiring University
of Tennessee head coach emeritus Pat Summitt and knowing that was where she belonged.
She read Summitt’s books and kept a copy of Summitt’s Reach for the Summit: The Definite Dozen System for Succeeding at Whatever You Do readily available in her bedroom.

Although early-onset Alzheimer’s disease caused Summitt to retire before Carter’s freshman year, her impact on the
program, the game of basketball and women’s sports still fuels Carter’s pursuit of excellence.

“She created so many opportunities for women,” says Carter, 22. “She’s definitely a legend. It’s how humble she was when she could have been the most arrogant woman in the world because she was so amazing. On the court, off the court, I thank her.”

Carter carries a humble demeanor and refuses to boast about her own extraordinary accomplishments,
which include sustaining a 4.0 average throughout her undergraduate studies and graduating in three years. She has
been recognized on the SEC Academic Honor Roll three times and participated in VOLeaders Academy.

She is nonchalant in describing the effort that went into the early graduation with a major in communications studies. Advanced Placement classes in high school brought her some college credits and she took summer school courses when she was on campus training or rehabbing injuries.

“I packed as many hours as I could into my schedule during my undergraduate studies,” Carter says. “It wasn’t with the intention of graduating in three years. It was just ‘I can handle this. Give me more.’

“School and academics have always been something I took seriously,” she continues. “I did it naturally. Then all of
a sudden last year [my academic adviser said], ‘You’re done. You don’t have any hours left in your undergraduate degree. You’ve got to pick a master’s program.’”

Carter, who plays both point and shooting guard, is now pursuing a master’s degree in sports
psychology. She gives what Tennessee coach Holly Warlick says is an exemplary effort — competitive on the court and compassionate in the community.

“Andraya thrives on excellence,” says Warlick. “She’s a very driven young lady who wants to be outstanding in everything she does. She’s definitely one of our leaders. … She’s one of those people that people
gravitate to and everyone loves to be around.”

Carter’s most profound community impact has been at the Tennessee School for the Deaf (TSD), where she has become a fixture. One of the reasons Carter selected communications as her major is because it allowed her to take sign language as her foreign language requirement. Last fall, she attended physical education classes at TSD twice a week and taught basketball skills and life skills. With this semester’s packed game schedule,
she stops by when she can and attends some of the school’s basketball games.

“I love kids,” Carter says. “I love impacting others, especially people that a lot of others maybe forget about or don’t give enough credit to. I wanted to make an impact in that area. Sign language was my avenue there.”

When TSD students attended a Lady Vols game in February, Carter and two students signed the National Anthem.
She plays down her own efforts, reflecting instead on how much the students enjoyed the game.

Kayla Smith, Tennessee’s director of student-athlete development, says that she’s seen the faces of TSD students light up every time Carter enters a room. Warlick says kids rush toward her, each wanting a hug.

Grateful for the incredible support that the Lady Vols receive from the university and the Knoxville community and the vast opportunities that women’s basketball has given her throughout college, Carter feels it’s a privilege to give back.

“We’re reaping the benefits of the great Lady Vols that have come before us; we have to uphold our end of the legacy and create our own legacy,” Carter says. 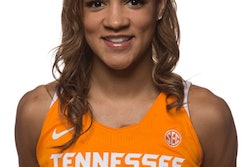