Title: Assistant Professor of Mechanical Engineering; Director of the Center for Biomedical and Rehabilitation Engineering, University of the District of Columbia

Take one step into Dr. Lara A. Thompson’s engineering lab at the University of the District of Columbia (UDC), with its hightech equipment, and you will quickly get a glimpse of why Thompson loves what she does.

“None of this was here before,” says Thompson, an assistant professor of mechanical engineering and director of the biomedical engineering program at UDC, of the spacious facility that is now used to conduct postural and rehabilitation research for stroke survivors, the elderly who are susceptible to falls, and current and former athletes.

The lab, which was established as a result of a three-year National Science Foundation grant of $400,000, includes sophisticated equipment that measures, among many things, an individual’s balance and movements.

For Thompson, who wrote the proposal for the creation of the Biomedical Engineering Program at UDC, this type of cutting-edge work is what excites her most about working in the academy. Born in Boston, Thompson grew up in southern New Hampshire and matriculated at the University of Massachusetts Lowell, where her father — a professor of electrical and computer engineering and director of the school’s Center for Advanced Computation and Telecommunications — remains on the faculty.

“Growing up I had a lot of interests, and I had a lot of energy,” says Thompson who took the advice of her UMass Lowell professor and went on to Stanford University for graduate school and earned a master’s in aeronautical and astronautical engineering.

From 2005 to 2007, Thompson worked as a mechanical engineer at Charles Stark Draper Laboratory and then enrolled in the Harvard-MIT Division of Health Sciences and Technology at Massachusetts Institute of Technology, where she earned a doctorate in biomedical engineering in 2013. When it was time for her to go on the job market, she interviewed and landed the job at UDC.

At UDC, Thompson encourages her students — the majority of whom are minorities and fi rst-generation students — that they can accomplish whatever they set out to do.

“Many of my students are as good as students anywhere else,” says Th ompson. “When people tell me that they are surprised by how good my students are, I say to them, ‘I’m not surprised. Why are you surprised?’”

Thompson’s own family history is a perfect study in the intersections of race and culture.

Her paternal grandparents met in the 1950s during the Korean War. Her grandmother grew up in Japan and her grandfather, a Black man from Pittsburgh who was a high school dropout, worked as an airplane mechanic.

Curious observers often wonder about Thompson’s ethnicity. Her mother is Filipino. Her personal identity provides an opportunity for her to discuss the personal advantages of diversity.

Thompson says that she is oft en asked what it’s like to work in a field where women are underrepresented. “I never really think about it,” she says. “I don’t think of myself as being oppressed and I don’t want my students to feel like they can’t do what they want to do. I tell them all the time that I want them to feel empowered.” 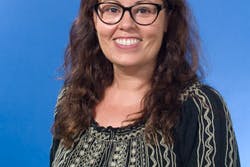 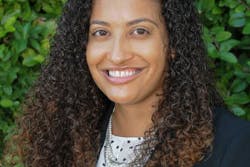 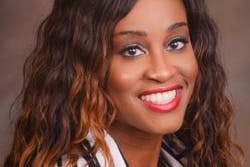 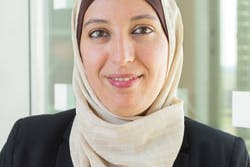