PROVIDENCE, R.I. – William J. Brown led a typical life for a free Black man in 1800s Providence. He was a shoemaker and a preacher, and through his church became a leader of the city’s African-American community before dying at age 71 in 1886.

He likely would have been forgotten by history if he hadn’t written a memoir, The Life of William J. Brown of Providence, R.I., published three years before his death. The book chronicles Brown’s family history, including how his grandfather was brought to Rhode Island on a slave ship owned by the Brown family, for whom Brown University is named; the freeing of his father by abolitionist Moses Brown; and his own travels through the city, rubbing elbows with the White elite along the way.

Now, Brown’s book is at the center of a yearlong project, funded by the Rhode Island Council on the Humanities, which seeks to raise his profile and further the public’s understanding of African-American history in Rhode Island. The project will include events such as lectures and walking tours, and its organizers are asking dozens of book clubs and libraries to put the book on their reading lists this year.

Ray Rickman, a rare book dealer and history buff who is helping to lead the project, said he hopes that someday Brown’s book will become as widely read in Rhode Island as works by John Steinbeck or William Faulkner.

“There are books that are in the culture, and that’s what we’re trying to do, is get William J. Brown into the culture of Rhode Island,” Rickman said. “It is a stunning piece of historic commentary.”

Brown’s first-person narrative is among only a few dozen such narratives by so-called free people of color – African Americans who were free during the time of slavery – Rickman said. The most famous narrative was by Frederick Douglass.

Many such narratives were ghostwritten, and contemporary readers can find the style and grammar difficult, he said. Brown’s memoir is different because it is so accessible to audiences today and because, many scholars believe, it was likely written by him, said Morgan Grefe, a historian who oversees education and public programs at the Rhode Island Historical Society.

Grefe calls it a remarkable and personal story that gives readers a fresh view of 19th-century Providence, which is most often seen through from the perspective of the White ruling class. Instead, the book allows readers to see events through the eyes of one of the city’s many free Black residents.

“They were a huge and vital part of the community, closely connected and intertwined with the lives of those families,” she said.

Even after William J. Brown’s father was freed, he worked for Moses Brown and their families maintained close ties. While he has kind words for Moses Brown, who opposed slavery and is an admired figure in the state’s history, William J. Brown also tells of Moses Brown going back on a promise to give land to his father, only giving him some of what he promised. These kind of details shed light on our understanding of the state’s complicated history, Rickman said.

“Here’s Moses pushing for freedom,” he said. “But then he’s willing to use his status and clout to take back half the gift.”

In his book, Brown, whose mother was a Narragansett Indian, describes telling fellow patients at a Boston hospital how the races mixed in the city.

“I told them the rich White people of Providence associate with all respectable colored people; and we associate with them, because from them comes our support. We also are in harmony with the poorer class of White people, and treat them well,” he writes.

But he also speaks of anger and bitterness directed at the Black community by Whites, and the lack of protection by the law – unless a member of the White community intervened.

Brown, who went to school until he was 20, tells of a time when he and a friend were walking to night school and got into a fight with some White men. Another White man intervened and demanded the two be hauled off to jail, until the owner of a nearby apothecary shop stepped in to vouch for them.

Brown describes places that no longer exist, such as Addison Hollow, also known as Hardscrabble, where Whites attacked African-American residents in 1824, and an area where men would line the street looking for fights, called Scamps Corner. But it also describes existing neighborhoods and buildings on the city’s East Side in such detail that readers can picture him walking down the street.

Rickman plans to use those descriptions to design two walking tours, one for the public and one aimed at teachers, whom he is especially targeting in hopes that Brown’s story will reach the classroom and become part of the state’s history curriculum. 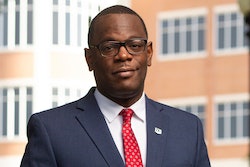