Asian-American, Pacific Islanders Flying Under Radar as a Political Force 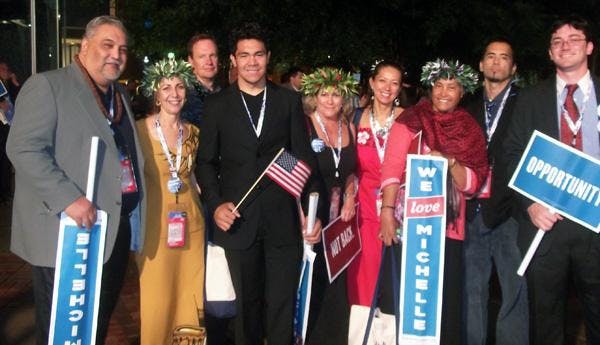 American Samoa was well represented at the Democratic National Convention in Charlotte but the lack of electoral votes and under-representation in polls more than offset that visibility.

In such a tight presidential race, Asian-American and Pacific Islanders would like to be the swing vote that can provide a margin of victory for somebody—if only anyone would pay attention.

Instead, it appears the AAPI voters have taken on the trait of their subgroup, the Pacific Islanders, the people and descendants of Oceania and its three regions: Polynesia, Melanesia and Micronesia.

When it comes to the area that includes the remote unincorporated American territories like American Samoa and Guam, most people have amnesia.

Ironically, one of the moments we are reminded of this oft-forgotten group comes during the political conventions, when the cameras pan or the picture cuts away to reveal the small delegations underneath the name banners declaring a real political presence.

Unfortunately, with no electoral votes allocated to the territories, it makes for a hollow political show.

At least they had their place at the conventions.

The same cannot be said of the larger part of AAPI, Asian-Americans, who, along with people of color in general, didn’t seem to show up very much, particularly at the Republican National Convention.

Sure, the GOP sent former Secretary of State Condoleezza Rice, Gov. Susana Martinez, Sen. Marco Rubio and Gov. Nikki Haley—model minorities all—to the podium, but you didn’t see many diverse faces among the rank and file in the hall.

Maybe they were sitting alongside President Obama in Clint Eastwood’s infamous empty chair?

When it comes to diversity, there is no more clear-cut issue that separates the two parties this election year. And the conventions were proof of that.

At the RNC, I had jokingly set an “over/under” of 10 for the number of times Asian-Americans might actually show up on my TV screen. And not just in speeches on the podium; I was including cutaways in the crowd as well. My final count was well under 10 for the entire RNC.

The RNC featured Haley, governor of South Carolina and the highest ranking Asian-American official, delivering the harshest anti-diversity rhetoric at the RNC, advocating for immigration laws like the much despised “show me your papers” law in Arizona. And there was Haley praising the push of her state and others to install harsh voter ID requirements that some believe are intended only to disenfranchise minority voters.

By comparison, it was much different at the Democratic National Convention, where there were many more people of color in the crowd and at the podium.

Congressional candidate Tammy Duckworth and Calif. Attorney General Kamala Harris certainly appeared to be groomed for higher office. And, of course, there were the old standbys like Guam and American Samoa. Still, the DNC just had a different energy and look. Diversity showed up in such a big way with the Democrats that the GOP looked pallid and ghostly by comparison.

The feel and look of the conventions should be no surprise given the approach the GOP is taking, going on an all-out mission to court the “White Only” vote.

Political number crunchers say, if the GOP could reach 61 percent of the White vote—a historic level of White voters—then it needn’t be worried about losing the Black or the Latino vote.

Blacks and Latinos have almost turned to Obama by default. During the week of the convention, Latino support for Obama was 60 percent. In an NBC News/WSJ poll conducted August 16–20, African-American support was so great for Obama that Romney’s Black support was put at 0 percent.

One problem is that Asian-Americans rarely show up in the political polls, the main agenda-setter for politics. Mostly that’s because polls rarely take the time and money to oversample for Asians or do translated poll questions. Maybe more mainstream polls should. In oversampled polls by community groups, Asian-Americans appear to be more than 30 percent undecided, especially in two of the key battleground states: Nevada and Virginia.

Those two states have higher-than-average numbers of minority voters. In one scenario, if Obama had those two states (Nevada and Virginia) plus North Carolina, he’d have 271 electoral votes, one more than required for an electoral college victory.