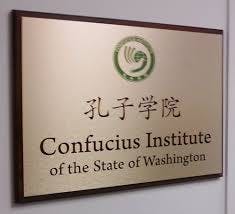 Confucius InstituteWASHINGTON ― China’s authoritarian government is gaining a foothold on American campuses by funding dozens of institutes that project a rose-tinted view of the Asian nation that compromises the academic integrity of U.S. universities, a congressional hearing was told Thursday.

Scholars of China testified that these state-funded Confucius Institutes teach nonpolitical subjects like Chinese language and culture but suppress discussion on sensitive topics like Tibet and the 1989 Tiananmen crackdown on democracy protesters.

The hearing was chaired by House Republican Rep. Chris Smith, an arch critic of Beijing, who questioned whether American education was “for sale.”

Students from China now make up 31 percent of all international students in the United States. Last year, Chinese students in U.S. colleges and universities contributed $8 billion to the U.S. economy, according to the Commerce Department.

U.S. colleges such as New York University are also opening campuses in China, hoping to tap into the country’s enormous, growing pool of students.

Geng Shuang, spokesman for the Chinese Embassy in Washington, said China-U.S. educational exchange is carried out on a voluntary basis and respects the academic independence and integrity of all educational institutions.

Perry Link, a China expert at the University of California at Riverside, said independent scholar-to-scholar exchanges with China should be encouraged.

But he said the Communist Party of China opposes the exchanges and prefers to negotiate campus-to-campus cooperation. He said inexperienced U.S. academic administrators, eager for funding, reach protocols with party officials that allow authorities in Beijing to choose teachers and set curricula that provide a rosy “cameo” of China.

Thomas Cushman, a professor in social sciences at Wellesley College, said the Chinese government’s effort to forge ties with U.S institutions is part of a more general “soft power” strategy toward the West.

There are now about 90 Confucius Institutes in the U.S., part of an expanding network of more than 400 worldwide. Geng, the embassy spokesman, said the institutes help people learn about Chinese language and culture and strengthen cooperation between China and other countries.

But there has been some push back from scholars and colleges in the U.S. In June, the American Association of University Professors called on universities to cancel their current agreements with Confucius Institutes, and this fall the University of Chicago and Penn State ended their relationships with the institute.

The Chinese state-funded outreach comes amid growing restrictions on scholars at home as President Xi Jinping’s government has tightened controls over a wide range of society since he took power early last year.

“For decades, the primary strategy of the CPC in censoring its own people has been to induce self-censorship,” Link said, referring to the Communist Party of China. “Now the CPC, stronger and wealthier than before, is looking to project these battle-tested methods onto the world stage.”

Cushman said U.S. scholars of China are careful what they say in public so they can keep visiting. He said that leads to a “beautified” version of China that avoids the realities of repression.

Link said he’s been blacklisted since the mid-1990s and gets two or three inquiries per month from younger scholars wanting to know what they should avoid saying in order not to be barred.

Cushman also contended that professors on U.S. campuses may avoid discussing sensitive topics about China in their classes out of fear of negative evaluations by the growing number of Chinese students.