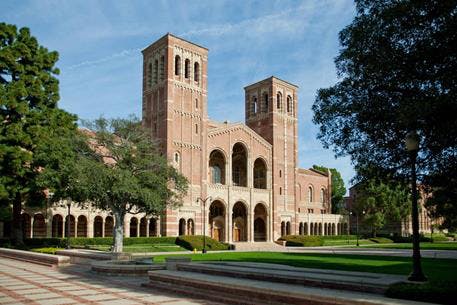 University of California, Los AngelesSAN FRANCISCO—Although 72 years have passed, James Tanimoto and his brother, Mori, still recall the night that rifles were pointed at them.

The Tanimoto brothers were asleep when a loud voice rousted them and other men from their beds. They were ordered to leave the building. Outside, a floodlight was trained on all of them. Two guards manned a machine gun. Others swiftly loaded their rifles, which they directed at the men, who were all of Japanese descent.

“I thought we were in front of a firing squad,” James Tanimoto said.

One of their captors declared that none of the Japanese Americans would escape.

No shots were fired, however. The terrifying incident ended with the guards ordering the uninjured men to return indoors and go back to bed.

Despite what happened, though, the Tanimoto brothers and others continued to refuse to complete a controversial questionnaire that had been imposed on them by U.S. government officials who claimed it was supposed to gauge their loyalty to this country.

The Tanimoto brothers recounted the middle-of-the-night episode during a public discussion and historical archives presentation for the Suyama Project last weekend in San Francisco’s Japantown district.

Organized by the University of California, Los Angeles’s Asian American Studies Center, the Suyama Project aims to preserve the history of Japanese American resistance during World War II, a period when the U.S. government forcibly imprisoned about 120,000 people of that ethnic group based solely on ancestry.

Although social stereotypes, popular culture and a great deal of documentation portray the confined Japanese Americans as docile and cooperative, numerous instances of civil disobedience, protest and legal challenge occurred at the government-run incarceration camps.

A disgraceful chapter of U.S. history began in the aftermath of Japan’s bombing of Pearl Harbor in December 1941. Amid the ensuing hysteria and xenophobia, President Franklin Roosevelt signed Executive Order 9066, which singled out Americans of Japanese descent. The order included measures such as curfews and mass removal of Japanese Americans from their homes, workplaces and schools, mostly along the West Coast. By 1942, the government began herding Japanese Americans into hastily constructed, remote camps in harsh terrain and climates, surrounded by armed guards and fences.

At the San Francisco presentation, Hirabayashi explained a growing social and academic movement to stop using “internment” and “internees” when referring to the wartime camps and the people who were confined there because the majority of individuals were, like the Tanimoto brothers, U.S.-born and therefore citizens by birth. Meanwhile, the term “internee” is actually designated for foreign nationals.

Before the war, Mori and James Tanimoto grew up among seven siblings on their family’s peach farm in Gridley, Calif. After the attack on Pearl Harbor, Mori and James were willing to join the U.S. military, but the draft board refused their service based on their ancestry.

In July 1942, James, Mori, their siblings and parents were forced to board a train for the Tule Lake incarceration camp near the Oregon border, leaving behind their farm and most of their belongings. At the camp, Mori, James and two other brothers shared a room of about 20 feet by 100 feet with a coal-burning stove as the only source for heat.

Back then, the government rationale for the mass removal was to “protect” people of Japanese descent, but Mori, along with others, criticized the line as “baloney.”

“This was a violation of my Constitutional rights,” Mori said at the San Francisco event. “We should not have had machine guns pointed at us.”

Officials of the War Relocation Authority (WRA), an agency that oversaw the network of camps and the long-term imprisonment of Japanese Americans, implemented a so-called loyalty program. People in the camps had to answer the poorly crafted questionnaire, and, ironically, men who were deemed “loyal” could subsequently be drafted into a U.S. military combat unit.

Two questions on the form proved particularly insulting among Japanese Americans. One of them asked if they were willing to serve in the U.S. military. The other asked if they were willing to “swear unqualified allegiance” to this country and to “forswear allegiance” to the emperor of Japan and other foreign powers. Failure to complete the questionnaire or answers of “no” to those two questions would result in punitive segregation.

Nonetheless, Mori, James and a third Tanimoto brother refused to answer both questions.

“I resisted because my government was wrong,” said James, now age 91. “We were forced into camps without due process. I had no ties to the emperor of Japan. If your government took away your rights based solely on your ancestry, don’t you think it’s an abuse of power?”

Added Mori, who’s now 94, “We individually decided not to answer. It was an avenue to challenge our government. If we don’t do what we believe in, why live?”

Despite daily pressure from WRA officials to answer both questions, the Tanimotos, along with others, stood their ground. By February 1943, WRA officials decided to make examples of people housed on Block 42 at the Tule Lake camp, which included the Tanimoto brothers.

One evening after dinner, they were exiting the mess hall when they were surrounded by military police. About 35 men including the three Tanimotos were rounded up. The individuals who were suspected as leaders of the dissidents, such as the eldest Tanimoto brother, Mike, were hauled to another facility.

Most of the others, including Mori and James, were driven to county jails, where they were held for a week without hearings or trials, or criminal charges being filed. These men, who had been divided among two jails, were re-assembled and deposited collectively into a former Civilian Conservation Corps camp that was about 10 miles from the WRA’s Tule Lake camp.

During their monthlong stay, they were all awakened one night and ordered outside the barracks, where they faced armed guards.

“They must have thought we were plotting an escape,” said James, who theorized that the guards were trying to scare them into completing the questionnaire.

The men were eventually returned to the Tule Lake camp and reunited with family members despite not finishing the questionnaire.

After the war, the Tanimotos resumed farming in Gridley—trusted friends tended the property during their absence—and experimented with growing kiwi from seedlings. The Tanimotos were among the first to sell the fruit in this country and in Japan.

A man in the audience at the San Francisco presentation identified himself as staying in Block 40, which was near the Tanimotos’s area in the Tule Lake camp. He recalled the day the brothers and others were forcibly hauled away in trucks from Tule Lake—mothers and sisters were shouting goodbyes and crying. He and other men who witnessed the incident returned to their quarters to pack their few possessions, figuring they would be next—although no one else was removed.

The man noted the Tanimotos’s courage and thanked them for “taking the rap for so many of us” dissidents.

Launched last fall by UCLA, the Suyama Project houses a digital collection of papers and photographs documenting the lives and actions of Japanese Americans, including, but not limited to, military draft resisters as well as dissenters such as the Tanimoto brothers who refused to answer the loyalty questions.

Examples of items in the digital archive are letters of complaint to newspaper editors, sketches of what dissident meeting areas looked like and a photo of an 18-inch mat with the word “mother” that was woven by one of the incarcerated Japanese Americans. Mori Tanimoto brought to the San Francisco presentation a slim, dark, weathered suitcase that he’d taken to Tule Lake that was purchased for 98 cents before the war.

At the San Francisco event, UCLA educators encouraged attendees to contact them about documents and personal items that can be scanned or photographed for the digital archive. Because so many formerly incarcerated Japanese Americans are now deceased—Mori Tanimoto believes he and James are now the lone survivors of Tule Lake’s Block 42—the task falls largely on their descendants.

“We’re interested in primary documents,” said Hirabayashi, the UCLA professor. “Look in family photo albums. Look in the attic. We’re pleading with you to go to family resources.”

For more information about the Suyama Project, visit www.suyamaproject.org.