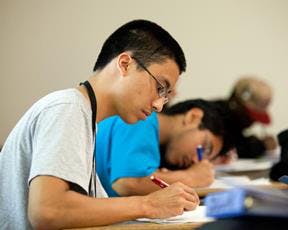 SAN FRANCISCO — Before enrolling at California State University, Sacramento, Pakou Her didn’t contemplate careers beyond what her family suggested. Furthermore, Her didn’t think of herself as Asian American, only Hmong American.

But all that changed in college, where she began participating in Sacramento State’s Full Circle initiative, a federally funded endeavor aimed at reducing educational disparities among Asian American subgroups and improving graduation rates.

“I was a shy girl, and it was a big step for me to leave home for college,” said Her, whose family lives in Marysville, a town of 12,000 about 40 miles north of Sacramento. “My family thinks the best careers are in medicine and law, so I thought I would study nursing. But now that I’m seeing how higher education changes so many lives, especially for low-income people, I might work in higher education instead.”

She added, “I am now better able to express what I want.”

Her’s comments came last week during the annual conference of the Asian Pacific Americans in Higher Education (APAHE). Since its 1987 inception, the organization has developed programs and addressed issues impacting Asian Americans and Pacific Islanders (AAPIs). It has evolved from a group of almost exclusively Californians into one with national reach.

Her and other Sacramento State undergraduates were panelists at a session titled “Student Leaders Coming Full Circle.” Their reflections illustrate some of the outcomes and benefits produced by initiatives financed by U.S. Department of Education grants for universities designated as Asian American and Native American Pacific Islander-Serving Institutions (AANAPISI). Ten percent or more of undergraduates at each of these schools, including Sacramento State, are AAPI and at least 50 percent of all students there, regardless of race, rely on Pell Grants or other federal aid.

At Sacramento State, a major component of its Full Circle initiative consists of ethnic studies courses aimed at increasing retention of AAPI freshmen. Two courses per semester introduce first-year students to Asian American studies, ethnic studies, and contemporary issues and social change. All of the courses count toward graduation requirements for any academic major.

Among other topics, freshmen in the Full Circle courses learn about the 1968 student-led strike at San Francisco State University that led to the birth of what is now its ethnic studies college. The Sacramento State freshmen organize themselves into teams to pursue a social justice project, whether it’s reducing cruelty to animals or trying to end child abuse. They research their subject, form a partnership with an off-campus group and execute their project. In a series of panel discussions in class, the students share their findings and reflections with their peers.

Although the Full Circle initiative is only in its third school year, some of the academic milestones already show promise, educators said.

The Full Circle participants from 2012-13 also had higher grade point averages both semesters than their AAPI peers who were nonparticipants. In the fall, the Full Circle freshmen had an average GPA of 3.27, compared with 2.81 for other AAPI freshmen, and in the spring, it was 3.12 versus 2.78.

The retention rate and GPAs are encouraging signs at Sacramento State, where the most populous AAPI subgroups are Filipino and Hmong, educators said. Nationally, only about 13 percent of Hmong Americans hold a bachelor’s degree, while it’s 48 percent among Filipino Americans.

With a theme of “Many Identities: One Call to Action,” APAHE conference workshops examined challenges in academia that have been overcome as well as those that remain, such as issues faced by AAPI military veterans and foster youth, respectively, on college campuses.

At the University of Massachusetts Boston, for example, an AANAPISI grant supports writing seminars aimed at helping AAPI students pass the university’s writing proficiency requirement, which students of every race and most academic majors must fulfill in order to graduate. The requirement calls for students to submit a 20-page portfolio, which includes a five-page composition based on a reading assignment.

The portfolio of writing proves difficult for many AAPI students at UMass Boston, a commuter school, because about 90 percent of them speak primarily a language different from English at home, said Sara Boxell, program assistant for the university’s Asian American student success initiative.

In seven semesters, the campus writing seminars, which are designed for first-year and intermediate levels, have served a total of 146 students, which marks 96 percent of class capacity, Boxell says.

The writing seminars have been successful interventions thus far, Boxell said, because the course content reflects the students’ family histories and lived realities. By writing collaboratively in class, the students are encouraged to share their opinions and build camaraderie with their classmates.

When assembling content for the ethnic studies courses, educators took care to consider the ancestral histories of students’ ethnic subgroups, and how those might impact their educational development needs, said Rikka Venturanza, program adviser for Full Circle. For instance, Hmong American students are likely to be descendants of refugees, whereas many of their Filipino American peers can trace their roots to the U.S. colonization of the Philippines.

The Full Circle initiative also includes academic advising for AAPI undergraduates and their mentoring students at a nearby high school and middle school.

Her, the Hmong American undergraduate, said that when she drops by to see Venturanza and other Full Circle staff, she still benefits even if they aren’t there. “There are always other students around, and we suggest classes to each other for the next semester.”

She added, “We want to help each other.”