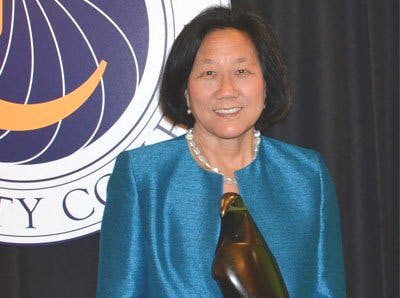 OAKLAND, Calif. — Growing up, Papu Togafau skipped school often, sometimes for days at a time. He accompanied his father to pick up cousins and other male Samoan relatives before taking on grueling jobs in masonry or cutting down trees.

Unlike many U.S. parents, however, Togafau’s father didn’t blink at his son’s absenteeism from school. In fact, the elder Togafau saw little practicality in him attending class. This belief stretched through his son’s high school years.

“My dad believed the best way to make me a man was putting me to work,” the younger Togafau said. “School wasn’t a priority. He believed that if we worked nonstop, we would always have enough for food and clothes. Doing physical work was more important than reading a book.”

His recollections came last week during the annual meeting of the Asian Pacific Americans in Higher Education (APAHE). Since its 1987 inception, the organization has developed programs and addressed issues impacting Asian Pacific Islander Americans. It has evolved from a group of almost exclusively Californians into one with national reach.

This year, conference-goers traveled from states as far as Massachusetts and Georgia but also from places west of California, such as the Marianas Islands and New Zealand.

The attendance total of 550 set a record, said Dr. Audrey Yamagata-Noji, APAHE board president and vice president of student services at Mt. San Antonio College. She noted that, as the conference has grown, so has the diversity and variety in workshop topics. This year, for example, the conference offerings included multiple panel discussions spotlighting the issues and interests of Native Hawaiians and Pacific Islanders, such as “Oceania Student Voices in Higher Education” and “Pacific Islanders: Navigators of the Stars are Being Denied Passage Toward Educational Attainment.”

Togafau, who’s a University of California, Los Angeles freshman, shared his personal narrative at a session titled, “The Gender Crisis,” which explored some of the reasons why male Pacific Islander Americans such as him are less likely than their female peers to attend college.

His father, an ex-Marine, also steered him toward football and wrestling teams at their San Bernardino, California, schools.

Among U.S. adults age 25 and older, only 3 percent of Marshallese and 12 percent of Samoans held a bachelor’s degree, according to the 2006-2010 American Community Survey 5-Year Estimates. In 2011, only about 38 percent of Native Hawaiian and Pacific Islander American college-age youths were enrolled in higher education, according to the National Center for Education Statistics.

But athletic scholarships are by no means a cure-all for the challenges facing these young men, said Rohit Maharaj, director of first-year and transfer internships in UCLA’s Community Programs Office.

Because of Pacific Islander American families’ tendency to emphasize physical and mental strength among their sons, the young men have much more difficulty asking for help when they’re in college, Maharaj said, adding, “When you’re in trouble, what do you do? Suddenly, there’s a new problem of how to solve the original problem. Also, they have amplified academic doubts.”

Furthermore, many U.S. cultural norms, stereotypes and misperceptions multiply the difficulty that Pacific Islander and Native Hawaiian college students have in convincing people on the mainland to provide them assistance, Maharaj and others said.

Some of these stereotypes, misperceptions and microaggressions were explored at an APAHE session titled, “I Love Hawaii.”

Whenever Dr. Kyle Reyes mentions to colleagues or new acquaintances that his late mother is buried in her native Hawaii, they tend to jump to their favorite vacation memories, which makes him cringe.

“They ask if I’m familiar with their favorite resorts, which I am not,” said Reyes, who is chief diversity officer and special assistant to the president for inclusion at Utah Valley University. “They ask if I play golf, and when I say, ‘No,’ they tell me, ‘Oh, you should learn. You don’t know what you’re missing.’ They tell me what they think they know about Hawaii, which is based only on travel, and they almost never ask about my family, or what Hawaii means to me.”

During the APAHE session, Reyes characterized this behavior as “paradise racism,” saying that too many Americans on the mainland limit their thoughts about Hawaii and the Pacific Islands to a utopia of “beaches, sunsets and bikinis.”

At “The Gender Crisis” session, UCLA students and staff shared components of the university’s Pacific Islander Education and Retention program, a student-run outreach initiative to nearby high schools to tutor, mentor and advise students there to encourage them to attend college.

Members of UCLA’s Pacific Islands Student Association also have kept close track of incoming student-athletes based on their surnames once the annual “decision day” has passed and high school seniors have chosen which athletic scholarship they will accept, said Veronica Zamani, a UCLA senior and the association’s president.

“Male camaraderie can be hard to build without a critical mass,” said Zamani, whose student group has about 35 regular participants. “But we did have one football player become involved, and that helped attract a couple of others.”

Even though Togafau frequently skipped class in high school, his mother had instilled in him a desire to seek education beyond 12th grade. Consequently, he studied enough to earn good grades and — as he described it at APAHE — on a whim, he applied for admission to UCLA. To his surprise, he received a letter of acceptance and decided to enroll as a first-generation college student.