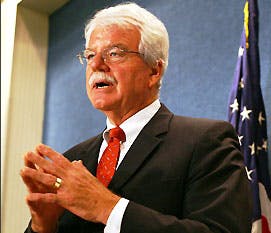 U.S. Rep. George Miller, D-California, is the senior Democratic member of the Education & the Workforce Committee.

WASHINGTON – Republicans and Democrats squared off at a particularly cantankerous hearing Wednesday that dealt with whether graduate student assistants and faculty should have the right to unionize.

Democrats blasted the hearing as unnecessary and misguided while Republicans decried recent moves by the NLRB as encroachments that could restrict religious and academic freedom and drive up tuition.

U.S. Congressman Robert E. Andrews, D-New Jersey, lamented that, instead of focusing on creating jobs for the 23 million unemployed Americans, lawmakers are taking up the issue of whether graduate student assistants and faculty members should be able to bargain on campus and whether a college is religious enough to get a religious exemption from the National Labor Relations Act, or NLRA.

“Only here in this city in this institution would these be regarded as the compelling questions on which the committee should spend its time,” Andrews said, later adding that the hearing represented a “classic case of Nero fiddling while Rome burns.”

“We are not fiddling while Rome burns,” countered U.S. Rep. Virginia Foxx, R-North Carolina, chairwoman of the House subcommittee on Higher Education and Workforce Training.

Wednesday’s hearing dealt with recent decisions by the Obama Administration’s National Labor Relations Board to:

“It would be foolish to consider each of these issues in isolation,” Roe said.

Much of the hearing focused on the issue of union rights for graduate student assistants.

“At Brown, we do not consider teaching, research or proctorships to be ‘jobs,’” Weber said. “That concept is so foreign to our academic mission that characterizing our Ph.D. candidates as ‘employees’ would irrevocably alter the essence of our programs.”

Miller said institutions could double the workloads of graduate student assistants and the assistants would be left no recourse.

Depriving the graduate student assistants of the right to bargain collectively suggests they are not intelligent enough to exercise the right responsibly, Miller said.

“So all the reasonable people sit on that side of the table,” Miller said sardonically, speaking directly to Weber. “They (graduate student assistants) would go crazy if they had a union but you would never go crazy if you have all the power in the graduate school.”

Christian Sweeney, deputy director of the Organizing Department of the AFL-CIO, said the notion that NLRB or “Big Labor” is pushing its way into academia is “misguided.”

“In fact, the opposite is true,” Sweeney said. “Workers in academia are reaching out to unions in large numbers.”

He said that, in the past dozen years of his union work, he has worked on 12 union representation elections that led to more than 20,000 employees obtaining representation in colleges and universities.

“Every single one of those 12 organizing campaigns was started because workers in those institutions reached out to the union for help in organizing,” Sweeney said.

Asked by Democratic lawmakers if there was any evidence that union organization drives up tuition, Sweeney said, “there is no evidence that I’ve seen.”

“We’re not talking about uneducated folks that might need the NLRA of the 1930s to help,” Rokita said.

“They may rely on it,” Rokita responded. “That doesn’t mean it’s right or that it’s needed.”

He cited NLRB v. Yeshiva, a 1980 case in which the Supreme Court held that full-time faculty members are managerial employees excluded from coverage under the NLRA.

“I believe that Yeshiva was properly decided,” Hunter said. “The Court clearly understood that not every university is the same, and the decision wisely left enough room for the Board to conclude that faculty at some universities do not meet the managerial standard.”

If a university uses a model in which faculty are not managerial—deciding what courses to offer and when they will be scheduled—the case allows for a different conclusion, Hunter said.

“No revisit of Yeshiva by (NLRB) is necessary or appropriate,” Hunter said.

Dr. Michael P. Moreland, vice dean and law professor at the Villanova University School of Law, said that for the NLRB to use a “substantial religious character” test to determine if an institution merits a religious exemption from NLRA is “at odds with over 30 years’ wroth of Supreme Court and lower court precedents.”

“This issue is not about whether employee unionization and mandatory collective bargaining are valuable legal and policy objectives under the National Labor Relations Act,” Moreland said. “Instead, this issue is about the freedom of religious institutions from government interference with regard to their religious mission.”

Moreland cited a D.C. Circuit case, University of Great Falls v. NLRB, in which the court said a religious institution was exempt from NLRB if it “holds itself out … as providing a religious educational environment,” is organized as a nonprofit and is affiliated with, or owned, or operated, or controlled by a religious organization.

“The NLRB has yet to employ this clear three-pronged test that appropriately balances religious freedom with the objectives of the NLRA,” Moreland said in his testimony.