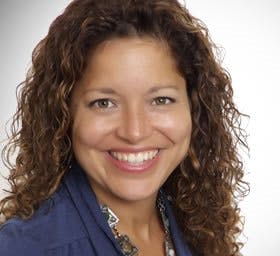 Kerry Ann Rockquemore, president and CEO of the National Center for Faculty Development & Diversity, says the “guru mentor model” isn’t even a healthy model because its based on dependency.

In order to increase and maintain gender and ethnic diversity within the STEM professoriate, the “guru mentor model” should be scrapped and replaced with a more thoughtful approach to the specific needs that new STEM faculty members have as they seek to launch their careers.

That was one of the key recommendations made Wednesday at a panel discussion that focused on what it takes to attract and keep more ethnic minorities and women in STEM faculty positions in order to break the cycle of the lack of role models from the same backgrounds as students who aspire to become professors.

“The biggest problem of all is that we somehow imagine that people can only be mentored in their specific field,” said Kerry Ann Rockquemore, president and CEO of the National Center for Faculty Development & Diversity.

“I think we need to fundamentally rethink mentoring, because ultimately this model that most people have in mind not only does it not work for most people most of the time, it’s not even what I would consider a healthy model because it’s a dependency model. People are going to one person over and over again to get their needs met.”

A better approach, Rockquemore said, would be to focus on people’s specific needs—whether it’s how to win an NIH grant, teach a larger class or establish one’s authority in a classroom where students are skeptical of their credentials because of prejudice against their background.

The best person to go to is one who has the particular expertise that a given faculty member needs at a given time.

“Whether you call them a mentor doesn’t matter,” Rockquemore said. “What matters is being surrounded by a wide network of people that you can talk with for advice.”

Rockquemore made her remarks at the American Institutes for Research in Washington, D.C., during a panel discussion titled “Breaking the Mold: Diversifying STEM Academia.”

Courtney Tanenbaum, Senior Researcher at AIR, said lack of diversity in STEM academia “sends cultural signals that constrain choices” and causes a dearth of role models and mentors and hinders new perspectives and approaches to research.

Michael J. Feuer, Dean of the Graduate School of Education & Human Development, said that, although some of the gaps cited by Tanenbaum are small and suggest that efforts to diversify campuses are beginning to yield results, it’s important for institutions not to slip into a state of complacency.

“Even if the differences are really small and they seem manageable and it seems like we’ve made progress, that should embolden us to keep working on it, not say: ‘Problem solved,’” Feuer said.

Feuer said diversity in department-based efforts must be achieved in different ways. He said it’s better to have faculty collaborate on a particular problem instead of trying to get members of various groups together.

Rockquemore said faculty who are members of underrepresented groups face additional pressures in their careers when they are constantly asked to represent their particular group on one or another committee.

“Their time is pressured because they’re getting all of these things coming at them from so many different places, and that time crunch then results in building pressures around the type of scholarly reputation, the type of work that is needed to get tenure,” she said. “If we take serious this idea that women and faculty of color have this additional set of pressures, how do we put meaningful things in place that help people work at their highest potential,” Rockquemore said.