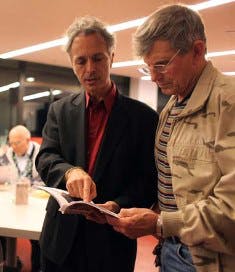 David Surface, left, a writing teacher and published author, says that the program should not be classified as therapy but it can be “cathartic.”HARRISON, N.Y. ― Matt Phair wept as he wrote about the chaos he witnessed as a Marine in 1975 at the end of the Vietnam War ― desperate civilians scrambling to escape, military police casually shooting a pet dog, the air smelling of “burning buildings, gunpowder and death.”

“It was a part of my life, it still is, and it was very liberating to finally have a way to express it,” the 59-year-old Phair said.

The account came out of the Veterans Writing Workshop, where veterans from World War II through Iraq and Afghanistan gather Tuesdays ― including Veterans Day ― to tap their memories of military life and commit them to paper for posterity.

About 200 vets, eight or 10 at a time, have gone through the free, 10-week workshop, funded by Fordham University and held on its suburban campus 25 miles north of New York City.

“These men all have this shared experience that really is unlike any other experience that people have,” said instructor David Surface, a veteran writing teacher and published author. “We fire up the coffee pot and they try to make some sense of it and communicate that to other people.”

The Fordham workshop, which began in 2010, is similar to others that have sprouted across the country. The theory is that veterans are more willing to talk ― and therefore write ― about their military experience in the company of other veterans.

Surface said he tries to show the veterans “that if you can tap into your own experience and your own memories and get those on the page, you can create some very compelling and vivid writing.”

“It’s not therapy,” Surface cautioned. “A lot of vets, if they hear the word therapy they will head in the opposite direction. But it is cathartic.”

The process begins with vets being asked to remember specific sights, sounds or smells from wartime, which helps them recall how they felt at the time.

Navy veteran Ryan Barry, now 29, of Norwalk, Connecticut, said fellow veteran writers supported him as he worked through his feelings when he wrote the antiwar poem, “Lt. Wise,” about the death of an officer.

The poem begins, “Can someone please explain to me/how a folded American triangle offers any type of closure/how memorials help to ease the pain?”

After each workshop, the veterans’ best work is published in an anthology. Last week, veterans ranging in age from their 20s to their 70s read from the latest book in a small cafe on the campus. One used a walker to get to the podium. One or two choked up as they read.

They were “spread about randomly, motionless, like a child’s toy soldiers dumped out of an old paper bag,” Speranza wrote.

Surface also teaches the course to homeless vets. An all-female class is in the works, as well as one for veterans’ families.

Rod Carlson, 72, of White Plains, who was a Marine helicopter pilot in Vietnam, said the workshop “isn’t for writers. It’s for veterans who have stories to tell.”

“It allows us to deal with our past, reposition memories, get out of isolation,” he said.

“Especially those of us who lost good friends many years ago. We come here, we remember them, we tell others about them and it’s like you haven’t abandoned them in enemy territory.”