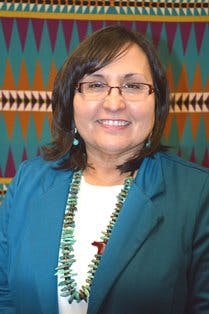 Dr. Venida Chenault initially discontinued her undergraduate studies at Haskell Indian Nations University in Lawrence, Kansas, due to a family tragedy. Decades later, Chenault’s education journey is coming full circle, after being selected as the university’s seventh president in January 2014.

After leaving Haskell, Chenault began working as a hotel maid. She then took vocational classes to become a secretary. With a son in tow, she became dissatisfied with her wages and the prospect of her future.

“You can only earn so much with that level of skill,” says Chenault, a member of the Prairie Band Potawatomi and Kickapoo tribes. “I also felt like there had to be more out there. I decided that I needed to go back to school and pursue my education.”

In 1984, she returned to Haskell, transferring to the University of Kansas soon after to pursue a degree in social work.

Early childhood experiences motivated Chenault to pursue a career in social welfare. Growing up in Topeka, Kansas, with five siblings raised by a single mother, Chenault’s family lived on meager means. In her early teens, she went to the welfare office with her mother — a strong woman who was a role model to the entire family.

“We met with a social worker who treated my mom very poorly,” she recalls. “I sat there watching her and thought to myself, ‘How dare you treat my mom with such disrespect,’ and I also thought that, at some point, I’m going to be sitting behind a desk and I will never treat people the way (my mom was) treated.”

As a social work major, Chenault was often steered in alternative directions by individuals who saw no financial gain in her career path.

“I decided that I (didn’t) care. I want(ed) to work with people because there are probably millions of people out there who have incredible potential, especially kids, and they don’t have people that are encouraging them to pursue this path called education,” she says.

After Chenault obtained a bachelor’s in social work, she worked in a program that assisted low-income women in becoming self-sufficient, providing services such as daycare, training and education.

Soon, however, she began to recognize that her clients’ needs were more than she was equipped to address. She decided to pursue a clinical track and completed a master’s in social work at the University of Kansas.

In 1991, she received a call from Haskell. The institution was revamping its social work program and invited Chenault to apply for a position. In this capacity, she planned curriculum, taught in the program and mentored social work majors.

Throughout her tenure, she worked in many administrative capacities, served in the Faculty Senate and contributed to various committees. She co-authored the proposal for the bachelor’s in American Indian studies program, approved by the Higher Learning Commission, while serving as the first interim director of American Indian studies.

As a faculty member, she also noticed that resources offered to the institution were scarce.

“Because we are a minority-serving institution, there seemed to be a bit of looking down at our institution,” says Chenault.

Chenault says she believed that if she had higher credentials, it could leverage more resources for Haskell. This led to her pursuing a doctorate in social welfare from the University of Kansas. After completing her doctorate, she was named as the university’s vice president of academic affairs.

Another area of concern for Chenault, particularly for students, is the misconception of indigenous people in higher education.

“Too often, (Native Americans) are invisible in higher ed or there are stereotypes and dehumanizing caricatures of who we are as tribal people,” says Chenault. “And that can be difficult because we have this image in our mind of what higher ed is about and sometimes it’s not all it’s cracked up to be.”

At Haskell, where 100 percent of students are associated with a federally recognized tribal nation, affirming representations of Native Americans is key. As such, the university’s curriculum is embedded in Native American culture from courses in history and sociology to psychology and business.

While maintaining this level of cultural pride, Chenault has formulated additional priorities since becoming president of the university.

Her prime foci include: increasing revenue in order to expand undergraduate degree offerings and begin offering graduate programs; improving retention and graduation rates of students; improving the recruitment, support and retention of faculty and staff; and preparing Haskell students for leadership and service to American Indian and Alaska Native tribes “to ensure that we’re still here 500 years from now,” she says.

Further, Chenault will continue to promote higher education as the road to travel, especially for students who are limited by financial resources.

“Not only do you get to develop your own potential, if you’re lucky, you’re going to get to pursue your passion and make a difference,” she says.

“Some people wonder later in life, ‘Did I really make a difference in my lifetime?’ … I know that I’ve made a difference and that’s probably the most valuable piece of my experience as an educator and now as an administrator for this university.”