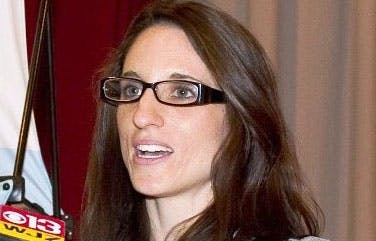 After returning to the U.S. following her participation in a 2008 Spanish immersion program in Nicaragua, Amy Pucino decided to get a certification in teaching English so that she could return to teach in  Nicaragua. Instead, she found herself enrolled in the Language, Literacy and Culture PhD program at University of Maryland, Baltimore County, volunteering with UMBC’s Refugee Youth Project (RYP).

Through the program, Pucino was assigned to a family that had fled from Iraq following the start of the 2003 Iraq War, and she was expected to meet with the illiterate mother and her seven children for two hours, once a week. But Pucino quickly realized that they needed much more than two hours a week of assistance.

“In addition to tutoring English, they were brand new to Baltimore, so there were far greater needs. They had to learn the whole system of institutions — figuring out how to acquire money for housing, getting social security — they needed institutional knowledge, not just linguistic.” She did everything from working with a landlord to prevent the family’s eviction to helping the family acquire health insurance to arranging doctor’s appointments.

“Whatever happens in this family, she steps up and goes way beyond what we expect of our mentors,” said RYP Volunteer Specialist Moira Fratantuono.

She joined RYP expecting to make a contribution by mentoring kids and teaching English. However, her role became much more far-reaching. As a result of her involvement with the family through the Refugee Youth Project, Pucino received a Compassionate Marylander Award — given to citizens who “impact the lives of others and go above and beyond the call of duty to ensure our neighbors in need are taken care of” — and a Governor’s Citation.

“Amy is one of these human beings, they walk around and have this special power to share their positive spirit. She is one of those individuals who always wants to keep growing and keep learning,” said Dr. Claudia Galindo, Pucino’s adviser at University of Maryland, Baltimore County.

Kursten Pickup, RYP Project Coordinator, said, “Anybody who spends that much time with the family is going to create a deep relationship with them.”

Impacted by her interactions with the Iraqi family, Pucino is now doing her dissertation on the community where she developed networks through RYP. Her research is focused on the relationships between Iraqi refugees and those who play an educational role in their lives.

She said, “In particular, the notion of ‘caring’ — what caring means to each culture in these relationships.” She added, “Educators need to be aware of this to create better care for the increasing diverse population and schools.”

Her experience with RYP also played a significant role in shaping her academic goals. “Through working with the family, I’ve picked up that the Iraqi population is an increasing population across the U.S. It’s our social responsibility to figure out ways to better serve the increasing population here. It taught me the importance of the need to work better with diverse communities.” Pucino said. “I wanted to do research that had some sort of practical application.”