Sandusky Sentenced to 30-60 Years in Prison 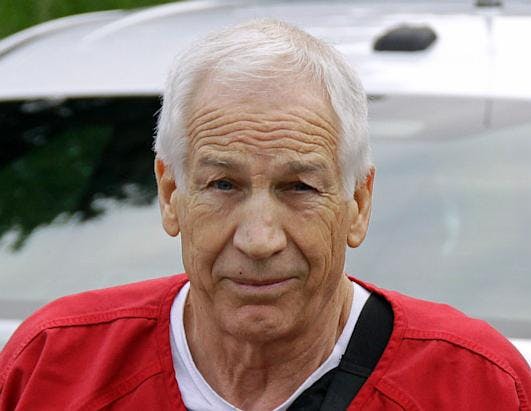 BELLEFONTE, Pa. — Jerry Sandusky, maintaining his innocence, was sentenced Tuesday to at least 30 years in prison effectively a life sentence in the child sexual abuse scandal that brought shame to Penn State and led to coach Joe Paterno’s downfall.

A defiant Sandusky gave a rambling statement in which he denied the allegations and talked about his life in prison and the pain of being away from his family.

Three victims spoke, often fighting back tears. One looked Sandusky in the eyes at times. Two of the men exchanged a long embrace after court was adjourned.

The 68-year-old former Penn State assistant coach was found guilty in June of 45 counts of child sexual abuse, convicted of molesting 10 boys over a 15-year period. Witnesses said Sandusky used the charitable organization he founded for troubled children as his personal hunting ground to find and groom boys to become his victims.

Judge John Cleland handed down a 30- to 60-year term. He called Sandusky dangerous, saying he betrayed children and abused their trust.

Sandusky’s arrest 11 months ago, and the details that came out during his trial over the summer, transformed Sandusky’s public image from a college coach who had been widely admired for his work with The Second Mile charity into that of a reviled pervert who preyed on the very youngsters who sought his help.

Sandusky has consistently maintained his innocence and plans to appeal. One element of the appeal is expected to be a claim that the defense did not have time to adequately prepare for trial. Sandusky was charged in November, following a lengthy investigation.

Sandusky said he knows in his heart that he did not do what he called “disgusting acts,” repeating a comment he made in a three-minute monologue that aired Monday night by Penn State Com Radio. In the radio recording, Sandusky described himself as the victim of a coordinated conspiracy among Penn State, investigators, civil attorneys, the media and others.

His statement in court lasted 15 minutes and his voice cracked as he spoke of missing his loved ones.

“I speak today with hope in my heart for a brighter day, not knowing if that day will come,” Sandusky said. “Many moments have been spent looking for a purpose. Maybe it will help others, some vulnerable children who might have been abused, might not be, as a result of the publicity.”

His statement also included numerous sports references. He said he once told his wife “we’re definitely in the fourth quarter” and he referenced the movie “Seabiscuit.”

He also spoke of instances in which he said he helped children.

Among the three victims who spoke Tuesday was a young man who said he was 11 when Sandusky groped him in a shower in 1998. He said Sandusky is in denial and should “stop coming up with excuses.”

“I’ve been left with deep painful wounds that you caused and had been buried in the garden of my heart for many years,” he said.

Another man said he was 13 when, in 2001, Sandusky lured him into a Penn State sauna and then a shower and then forced him to touch the ex-coach.

“I am troubled with flashbacks of his naked body, something that will never be erased from my memory,” he said. “Jerry has harmed children, of which I am one of them.”

Before sentencing, Judge Cleland designated Sandusky as a sexually violent predator under the state’s Megan’s Law. The label essentially has no effect on Sandusky, since its requirement is lifetime registration after a convict is released from prison. Sandusky won’t be released on parole before the minimum 30-year term is up.

“The tragedy of this crime is that it’s a story of betrayal. The most obvious aspect is your betrayal of 10 children,” Cleland told Sandusky. “I’m not going to sentence you to centuries in prison, although the law will permit that.” Still, Cleland said, he expected Sandusky to die in prison.

In sentencing the ex-coach, Cleland called Sandusky dangerous, saying, “You abused the trust of those who trusted you.” He also called Sandusky’s comments in the radio statement about a conspiracy against him “unbelievable.”

The scandal brought devastation in State College that will take years to fully assess, as Sandusky’s victims are pressing civil claims and a January trial is pending for Gary Schultz and Tim Curley, two university administrators charged with failing to properly report suspicions about Sandusky and lying to the grand jury that investigated him.

Soon after the three were arrested in November, the board of trustees fired head football coach Joe Paterno, the school’s most famous figure and a man who won two national college football championships in the 1980s. Paterno died of lung cancer in January.

Over the summer, an investigation commissioned by the university and led by former FBI Director Louis Freeh concluded that Paterno and other top officials covered up allegations against Sandusky for years to avoid bad publicity.

The scandal also toppled university President Graham Spanier and led to crippling NCAA sanctions against the football team that included a $60 million fine, a ban on postseason play and a reduction in the number of football scholarships the school can award. The NCAA also erased 14 years of victories for Paterno, stripping him of his standing as major college football’s winningest coach.

At least four young men have sued Penn State over the way the university responded to disturbing complaints about Sandusky.

Eight legal teams representing at least 20 young men have surfaced, and the school recently announced an effort to settle as many claims as possible by the end of the year. Several plaintiffs’ lawyers were in the courtroom.

Penn State President Rodney Erickson released a statement shortly after the sentence was handed down.

“Our thoughts today, as they have been for the last year, go out to the victims of Jerry Sandusky’s abuse,” Erickson said. “While today’s sentence cannot erase what has happened, hopefully it will provide comfort to those affected by these horrible events.”

The third victim who spoke had testified that he was raped over the course of years by Sandusky, including on team trips to bowl games in Texas and Florida.

“I want you to know I don’t forgive you and I don’t know if I will ever forgive you,” he said. “My only regret is that I didn’t come forward sooner.”