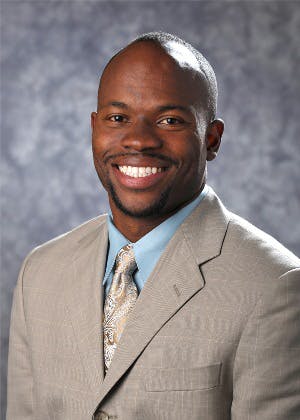 M. Brian Blake was first exposed to computers when his father, a jack of all trades who managed gas stations in Savannah, Ga., bought an Apple.

The fourth-grader took it over and began subscribing to a computer science magazine that carried coding for software programs. He’d make mistakes typing in the coding, or the magazine would print it wrong. He’d play around with the coding to make it work.

Overall, Blake says, he had “humble beginnings.” He started pumping gas when he was around 8 years old. He kept one pocket for the money customers paid for gas, and the other pocket for tips, which he put in a savings account.

But Blake kept learning more about computer science. His parents sent him to a summer computer camp. His interest opened doors for him.

Blake ran through those doorways. He got a bachelor’s degree from the Georgia Institute of Technology, became a software troubleshooter for corporations, collected a master’s degree and a Ph.D., and taught and did research in computer science, writing many scholarly articles.

Last July, Blake became vice provost for academic affairs and dean of the graduate school at the University of Miami.

He’s 41. “I’m the son of an entrepreneur,” Blake says, to explain his energetic, pragmatic approach to life.

Although he was keenly interested in computers, electrical engineering appeared to pay more at the time, and he received a bachelor’s degree in that field from Georgia Tech, with a minor in computer science.

Blake then gained invaluable experience and contacts while part of a kind of software SWAT team set up by a leadership development program at Lockheed Martin.

The team tackled software problems at Bell South, Bank of America, MCI and other corporations for two years.

“I learned so much,” says Blake, whose easy-going smile belies his determination. “I learned to rely on myself. You’re the expert. You know it’s got to be done. You’re on the line.” While in the program, Blake earned a master’s degree in electrical engineering at Mercer University.

Then in his mid-20s, Blake pondered starting a business with some of his fellow hotshots but thought a Ph.D. would add to his credentials.

He earned a doctorate from George Mason University in 2 ½ years while still working for Lockheed Martin. His thesis analyzed ways to coordinate web applications among businesses that hadn’t anticipated working with each other.

Looking for a job, Blake received offers from corporations, but sent out feelers to universities about teaching opportunities. He accepted a position as an adjunct professor in software engineering at Georgetown University and eventually became chairman of the computer science department, staying at the university for 13 years.

Blake later joined Notre Dame University as professor of computer science and engineering and associate dean for research and graduate studies in the college of engineering.

He took over his current position at the University of Miami last July, intrigued by the prospect of having oversight of faculty and research.

Blake and his wife, Bridget, a Georgia Tech grad in mechanical engineering with a master’s in business administration from Johns Hopkins University, also liked the idea of being within driving distance of Blake’s parents in Savannah. They have two young boys.

Not surprisingly, Blake wants to push the envelope at Miami. He’d like to see the private school become the Harvard of not only Florida but also Latin America and the Caribbean.

He hails the school’s ethnically diverse enrollment, saying he’d like to empower those students to be able to work—and make an impact—anywhere in the world.

Blake continues to do research, currently in cloud computing. He has published more than 150 articles and book contributions and served on various engineering and science boards.

He also pushes for more minorities in the sciences, speaking at schools and coordinating events where students can meet engineers and scientists. He challenges mentors to use “tough love”—to set high expectations and offer criticism that can help students grow.

Dr. Ayanna Howard said Blake has been an effective mentor after meeting her at a conference in 2005.

“He has the knack. He listens and knows how to feed that back to you,” says Howard, now chair of the Robotics PhD Program at Georgia Tech. “He brings you to a conclusion; he’s walked you through it, so you’re invested in it.”

Blake is a collaborator, says Dr. Juan Gilbert, chairman of the Division of Human-Centered Computing at Clemson University. “He’s even-keeled; a problem solver. He looks at both sides.”

The men helped each other after finding few other African-Americans in computer science to turn to. “We mentor each other,” says Gilbert.