PSMs: ‘A New Creature’ on the Higher Education Landscape 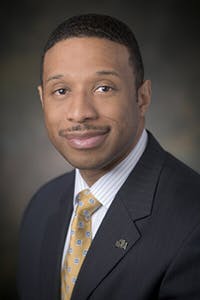 Dr. Brian Bridges is executive director of the Fredrick Patterson Research Institute at the United Negro College Fund.
When Andrew Chad Watson first heard about the Professional Science Master’s program, or PSM, at Rutgers University, he enrolled because he saw it as a “great fit” given his professional and academic experiences.

Earlier this year, as he finished his last course as a Master of Business and Science 4+1 student through the PSM at Rutgers with a concentration in Sustainability, Watson accepted a job as a project engineer at the nearby Public Service Electric and Gas Company, or PSE&G, in South Plainfield, N.J.

He believes the MBS courses he took through the PSM program, which he said combined science innovation with a strong business curriculum, gave him a competitive edge in his field.

“Being a part of the program and having graduated has made me a stronger candidate,” said Watson, 24, and a member of the National Society of Black Engineers.

Watson is part of the steadily growing number of students—including underrepresented minorities—who are enrolling in and graduating from PSMs, according to a new survey released this month by the Council of Graduate Schools.

However, there has been an overall increase of 80 percent in the number of underrepresented minorities earning degrees from PSM programs between academic years 2010 and 2012, from 166 to 298, the report states.

Dr. Brian K. Bridges, executive director of the Patterson Research Institute at UNCF, said he was encouraged when he saw that underrepresented minorities comprise 25 percent of those enrolled in PSMs and 23 percent of PSM graduates last year.

“This report could be an indicator that PSM programs have become more effective at recruiting underrepresented minority students than standard STEM programs,” Bridges said.

He added, however, that, despite the success of PSMs, “more work remains to promote awareness and access” for underrepresented minority students.

PSMs are a relatively new creature on the higher education landscape.

A project known as the PSM initiative began in 1997 with funding from the Alfred P. Sloan Foundation to support the establishment of programs in the natural sciences and mathematics at research institutions. The program was eventually expanded to master’s-focused institutions and is now run by the Council for Graduate Schools, which is seeking to make PSMs a permanent feature of graduate education.

Jeffrey R. Allum, Director of Research and Policy Analysis at the Council of Graduate Schools, said part of the appeal of PSMs that is driving their growth is the fact that the curriculum is “closely aligned with the local labor market.”

“It makes students feel like the degree will have more value to potential employers than a (regular) master’s degree or a doctorate,” Allum said. “In terms of a career, the PSM is really geared toward positioning the student for jobs in the private sector, nonprofit organizations and government entities.”

Nefertari Johnson, 43, of Bowie, Md., who is studying biotechnology at UMUC and is set to graduate this May, attests to the employment benefits of the PSM.

She said she had been attempting to get into the biomedical research field for 10 years but only got called for two or three interviews.

“Once I put on my resume that I was in graduate school, although I was nowhere near finishing, I started getting more responses from employers,” said Johnson, who works doing HIV clinical trials projects for Social & Scientific Systems Inc.

Both Johnson and Watson are in two fields of study—biotechnology and environmental sciences, respectively—that dominate PSM enrollment.

“I’m sure this is being driven by the economy and students moving to fields where jobs are more abundant,” Bridges said.