Appreciation of a Media Man With a Passion for Diversity 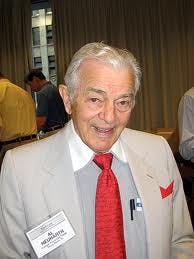 When South Dakota native Allen Neuharth got his chance to pursue his passion of being a news executive, he did so on a national scale as a trailblazer—reinventing news and newsrooms in the 1970s and 1980s with a relentless zeal and madness to his method that today still leaves many people amazed.

While making money was for sure at the center of his agenda as head of Gannett Co. Inc., Neuharth aggressively promoted his broad agenda as a nontraditional media mogul, forcing his rivals and peers to think outside the box or risk being consumed by his generosity with the company’s money he used to acquire dozens of small and mid-size papers and promote affirmative action and racial and gender diversity.

Neuharth succeeded in forcing many of his rivals and peers to reinvent their newspapers with shorter stories (500 word maximum, with few exceptions), more charts, graphs, color, snappier headlines and diversity of voices. His ideas for reinventing local papers went national when he debuted USA TODAY, the capstone of his media empire and its unusual news stand boxes shaped like a small television set in contrast to most local papers.

As he was empire building and moving to reinvent the news, Neuharth embraced and exerted a passion for affirmative action and diversity in the news business that had been widely talked about since the civil rights marches of the 1960s and late decade riots in major cities, yet timidly acted upon in a big way.

In just under a decade, Neuharth had bought many of the major dailies in the South that promoted and defended racial segregation and ridded those publications of an approach to news that ignored or demeaned racial minorities. He did the same when it came to women, opening access to top jobs that in the past were rarely thought of.

He gave his top staffing aides a clear mandate, authority and the money needed to turn his talk into action. Soon, people of many ethnic and racial backgrounds—men and women—were working in the newsrooms of Gannett-owned papers and television stations, oft times stunning peers, local, state and national leaders.

Neuharth died last week at his home in Florida at the age of 89.

“He was a game changer and not afraid to mix it up,” said Don Hudson, executive editor of the Decatur (Ala.) Daily and an admirer of Neuharth since the former Gannett chief visited Hudson’s college to explain to Hudson and his fellow students in a business class why USA TODAY was a good business idea.

Hudson, who later became part of Neuharth’s legacy when he (Hudson) was named managing editor of the Jackson Clarion-Ledger in Mississippi, is one of a series of people of color and women who can trace their ascendency in the once all-White newsrooms of America to Neuharth’s work as a “game changer.”

At one point, after Neuharth had marched through the South buying politically liberal newspapers like the Louisville (Ky.) Courier Journal and The Nashville Tennessean to staunch conservative publications like The Nashville Banner and Jackson Clarion, the papers at one point or another had Black men or women as editor, managing editor or publisher. Gannett has since lost most of its Black newsroom leadership, with the Black publisher of the Montgomery Advertiser leaving his post earlier this month.

While there are still complaints about the newspapers’ coverage, it is far less about outright racially biased reporting and more often about the papers’ being unwilling to take a firm stand on many occasions, a reference to Gannett’s approach to using editorial pages more as issue-and-debate and forum pages and less as vehicles to solely express a particular paper’s point of view.

Neuharth raised eyebrows in the 1990s when he appointed rising news executive Kathy Black as publisher of USA TODAY. Appearing at a dinner in Washington, D.C., to receive an award, Neuharth used the appearance to respond to his critics. He told the dinner banquet audience that he had heard some critics say she was the wrong choice, that she was not qualified for the job. “She may not be qualified,” Neuharth said, “but, she’s ready for the challenge.” It was such comments along the way in his career that left no doubt in people’s minds Neuharth saw the world differently.

After retiring from Gannett in the late 1980s along with Gannett business partner John Quinn, considered the conscience of the Gannett team lead by Neuharth, the two kept their diversity ideas intact when they launched the Freedom Forum, a Washington, D.C., center that promotes free speech and free press values.

The Freedom Forum, which operates the increasingly popular Newseum, launched a newsroom internship program in 1991 in honor of Quinn’s late son, Chips. The Chips Quinn program has since helped fund more than 1,300 internships for college students with journalistic aspirations, mostly students of color.

“He really wanted to make an impact and he did,” said Karen Lincoln Michel, executive editor of The Daily Advertiser, the Gannett daily paper in Lafayette, La., and former national president of the Native American Journalists Association. “It seems to me he understood the importance of diversity.”