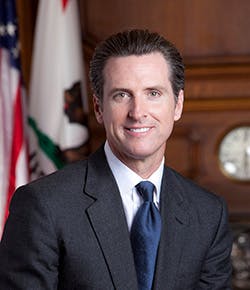 California Lt. Governor Gavin Newsom cited the success of MOOCs (massive online open courses) as a signal to institutions that “the way they are operating is obsolete.”

SAN FRANCISCO – With the theme of Higher Education Forging a State Agenda, the American Association of State Colleges and Universities (AASCU) kicked off its annual conference Wednesday with an emphasis on adaptation and innovation.

For example, Gavin Newsom, lieutenant governor of California, noted in the opening session of the Higher Education Government Relations Conference that school presidents, chancellors, administrators and policy makers need to move away from the old “business models of the 1960s and get with it.” He cited the success of MOOCs (massive online open courses) as a signal to institutions that “the way they are operating is obsolete.”

Newsom, who refers to himself as a “digital immigrant,” said he would like to see “teachers as mentors and coaches rather than transmitters of textbook information” and deal with the fact that 76 percent of incoming kindergarten children in California are non-White.”

“Fifty percent of contributions to the California State University system are from private organizations,” said Sunshine. The trend of private firms contributing more to public institutions is on the rise and are loosely being referred to as “state-controlled private institutions that need to be monitored more closely,” said Newsom.

The idea of embracing technology and innovation and evolving demographics made for a candid discussion about high-quality student outcomes in the next session.

Panelist Elizabeth R. Gutierrez, director of State Policy at the Lumina Foundation, spoke on their state policy agenda to increase higher education attainment. As the nation’s largest private foundation focused on increasing Americans’ success in higher education, Lumina’s Gutierrez outlined goals to be reached by 2025 such as having 60 percent of Americans secure high-quality degrees or certifications. She said this can be achieved by “improving quality of student outcomes in terms of completion, learning and employment, aligning investments with state priorities and student needs and creating smarter pathways for students.”

Sharing that sentiment was President Chris Bustamante of Rio Salado College in Arizona’s Maricopa County Community College system, which serves more than 200,000 students. In an example of creating smarter pathways to higher education for underrepresented groups, he said that Rio Salado has 48 start dates for new semesters. Its not just about online courses, Bustamante explained, but “innovative schedules,” which provide more access to higher education.