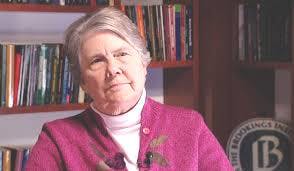 Isabel V. Sawhill, , a senior fellow in Economic Studies at the Brookings Institution, said it’s easier for individuals to become successful at the various stages of life if they’ve had success all along.WASHINGTON — An early version of a “life cycle model” meant to show what interventions are needed to propel poor children into a middle-class life of “success” got a fresh airing and a warm welcome this week at the American Institutes for Research.

The model is officially known as the Social Genome Project. Its architect is Isabel V. Sawhill, a senior fellow in Economic Studies at the Brookings Institution.

Sawhill introduced Wednesday what she referred to as “1.0” of the project, which she began in 2009 in her capacity as co-director of the Center on Children and Families as an effort to figure out how to increase economic opportunity for disadvantaged children.

Sawhill readily admitted that the project’s metrics of “success” at various life stages—from before birth to age 40—are arbitrary. For instance, at birth, those metrics include being born to a “non-poor married mother with at least a high school diploma.”

At the latter stage of the model is earning a family income of 300 percent of poverty—that would be $71,550 for a family of four—by age 40.

In between those two endpoints are a host of other stages and metrics, but perhaps of most interest—and possibly the most difficult metric to reach if earlier benchmarks are not met—is one that defines success for an adolescent as graduating from high school with a 2.5 or better without being convicted of a crime or becoming a parent.

“That doesn’t seem like a really high bar to get over, but you’ll be surprised how many kids don’t make it,” Sawhill said.

She said it’s easier for individuals to become successful at the various stages if they’ve had success all along.

“Success is a cumulative process,” Sawhilll said. “If you’ve been successful in one life stage, you’ll be much more likely to be successful at another life stage.”

For that reason, Sawhill said, it’s more effective and less costly to intervene earlier rather than later.

“It doesn’t mean it doesn’t help to intervene, but it will be harder and more expensive” if it’s done later, Sawhill said.

The interventions that Sawhill plugged into the model were selected for showing evidence of effectiveness. At the early childhood stages, the interventions include Home Instruction for Parents of Preschool Youngsters, better known as HIPPY, and high-quality preschool. At the middle childhood stage, they include the Success for All program, a school-wide reform program with a strong emphasis on early detection and prevention of reading problems, and that was the highest-rated “scale-up application” in the U.S. Department of Education Investing in Innovation’s, or i3, competition in 2010.

At the adolescent stage, the intervention includes Talent Development, a comprehensive high school reform initiative aimed at reducing student dropout rates and the highest rated “validation application” in i3 in 2010.

When the effect of the interventions are taken into account, Sawhill said, gaps in success at between kids from poor and well-to-do families were closed by about 70 percent.

In terms of impact, she said roughly $20,000 worth of interventions leads to $200,000 more in income over the course of a lifespan.

“In the end you’ve increased the lifetime income of these kids by something like $200,000, not huge, but very significant, and the rough cost has been roughly $20,000 per child,” Sawhill said. “If you think about the benefit cost framework, extra income of $200,000 is going to (generate) more tax revenue for the government and fewer expenditures for various social programs that low-income people need, and from those effects alone you will recoup more than the $20,000 that you need to make this investment.”

However, Sawhill—former associate director at the Office of Management and Budget from 1993 to 1995 under President Bill Clinton—said it’s difficult to make the case for such investments that yield long-term returns when government officials want more immediate results.

“We all know CBO doesn’t count long-term benefits, and that’s a problem,” Sawhill said of the Congressional Budget Office. “In the political world, this is still a hard sell.”

The model got mixed reviews Wednesday at AIR.

For instance, George Cave, a labor economist, evaluation expert and Senior Research Fellow at Summit LLC, said the Social Genome Project is “definitely the most comprehensive effort” he has ever heard of to make sure that positive evaluation findings are publicized and used by policymakers and stakeholders.

“SGP’s publicity should revive interest in evaluation findings about such important successes such as the Perry Pre-School and Talent Development projects,” he said, referring to the Perry study that found adults at age 40 who had the preschool program had higher incomes, were more likely to be employed, had done less crime and were more likely to have graduated from high school than adults who did not have pre-school.

Cave lamented that too often evaluations with positive results end up being forgotten on bookshelves and never put to use by policymakers.

However, Cave said he wanted to learn more about how the Social Genome model dealt with the issue of reducing the likelihood of apparent program impacts found in an evaluation sample being due to chance or other factors as opposed to program treatment. He also expressed concerns about shortcomings that Sawhill acknowledged in other data that she relied upon for the model.

“So for now I would withhold judgment about the overall value of the Social Genome Model for policy,” Cave said.