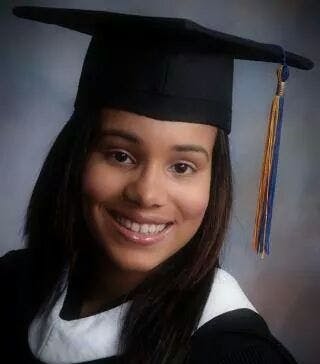 Jocelyn Cuadrado, a 2013 graduate who attended La Salle University via the Academic Discovery Program, said that “it seems like I graduated with family.”Usually when you hear about colleges wanting to know about a student’s SAT scores, it’s because they want students with scores that are relatively good.

In his capacity as director of the Academic Discovery Program at La Salle University, Bob Miedel deliberately seeks out students with SAT scores that are “slightly disappointing.”

By “disappointing” he means a combined math and critical reading score of 950 or below — less than the national average of 1010 for those two subjects combined.

Miedel says the rationale behind seeking out students with subpar SAT scores — and offering them generous financial aid — is to extend the benefit of higher education to economically disadvantaged students who otherwise do well in school but may not have done well on a test.

“Standardized tests are just that — standard,” Miedel told Diverse. “Colleges need to look beyond the standard, realizing that one test during one morning in a student’s life cannot measure desire, drive and hard work.”

For instance, earlier this year, a study ― titled “Defining Promise: Optional Standardized Testing Policies in American College and University Admissions” ― found only “trivial differences” in the GPAs and graduation rates of students who submitted college entrance exam scores versus those of non-submitters, who are more likely to be first-generation college students, minorities, women, Pell Grant recipients and students with learning differences.

“By looking beyond SAT scores, colleges can tap into a large pool of talented, energetic and delightful students whom they previously might have ignored,” Miedel said.

Among alumni of the Academic Discovery Program at La Salle ― commonly referred to as ADP ― is a Secret Service agent who protects Supreme Court justices, according to a program report that Miedel shared with Diverse. Another alumnus works at a medical research lab. Others have gone on to become nurses and police officers. One is pursuing a master’s in nursing anesthetics.

The ADP program, which seeks to admit between 36 and 42 students per year, has opened the doors of higher education to students such as Jocelyn Cuadrado, a 2013 La Salle graduate who now works as a teen parenting case manager at Congreso, a human service agency that serves Latino communities in Philadelphia.

“I had a great experience,” Cuadrado said. “Anytime I think back to my experience at La Salle University as a graduate of the ADP, it seems like I graduated with family.”

Graduation rates for ADP students are similar to that of the institution overall.

For instance, the four-year graduation rate for a recent cohort was 40 percent, a figure that Miedel says is “not an unusually low number since our students tend to take a bit more time to graduate than others.”

“We should have a 67.5 percent graduation rate with this cohort after 5 years,” Miedel’s report states. The six-year graduation rate at La Salle is 66 percent, federal data show.

ADP features a demanding summer program ― described as the “backbone” of the program ― to help prepare students for the rigors of college.

Students in the summer program attend classes from 8:30 a.m. to 4:30 p.m. in math or computer science, critical thinking, writing and study skills. Tutoring is available after class, as well as individual and group counseling. Students must study several hours after the classes each day.

“It is a pretty intense summer program,” Miedel states in his report.

Miedel recruited Cuadrado for the program back in 2009 when she was a senior at Community Academy of Philadelphia Charter High School.

Cuadrado said when Miedel reviewed her transcript and saw that she had a 3.5 and was ranked among the top five students in her school and had good attendance, it was enough to make him want to get to know her better as a student.

“He was asking me different questions that enabled him to get to know me better as a person, not just a poor test taker,” she said.

Now, as a proud La Salle alumnus, Cuadrado seeks to steer the young people she works with as a case manager at Congreso to the ADP at La Salle so that they can take advantage of the same opportunity.

“My goal is to empower them to go to college,” Cuadrado said. “I’m working with students that don’t do well on the SAT but, like me, have great dedication. They are college material and this program will make their dreams come true.”

Cuadrado described the financial aid that ADP scholars get as “amazing.”

Financing for the ADP comes largely from La Salle, which supports the students with grants and scholarships that amount to about $25,000 per year, Miedel said.

Ninety-seven percent of ADP students meet the full requirement for the Pennsylvania Higher Education Equal Opportunity Act of 1971, known as PHEAA Act 101, meaning that they have combined Math and Critical Reading SAT scores below 930 and have incomes at or below 200 percent of the federal poverty level, Miedel’s ADP report states.

Miedel does not harbor any notions that simply admitting students with low SAT scores and good grades will be enough to help them get through college.

“True, it takes a little more work, time and money to find and then bring these students to a college campus and then support their efforts to succeed, but these gems can be a great addition to a campus,” Miedel said.

The program helps boost the representation of diverse groups.

For instance, in last year’s cohort, about 49 percent of ADP students were African-American, 33 percent were Hispanic, 11 percent were Asian and 4 percent were classified as “other,” specifically, Arabic and Pakistani, ADP report shows. Three percent were Caucasian.

Compare that to campuswide, where just 17 percent of the students are African-American, 7 percent are Hispanic, 5 percent are Asian and 58 percent are Caucasian.

“It’s a shame more colleges don’t realize they are shooting themselves in the proverbial foot,” Miedel said. “Why would they want to miss out on accepting really talented, creative, diverse students who will do well at their institutions and go on to be outstanding alumni?”