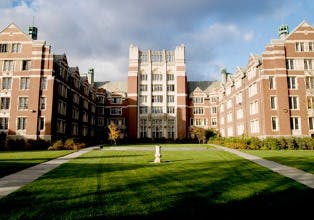 One of the persistent flaws in mainstream treatments of contemporary issues in higher education is that the narratives often give short shrift to diverse student groups.

Even when certain groups get the spotlight or an exclusive series, there’s a certain otherness to it all.

When you watch Ivory Tower ― a CNN Films presentation that makes its worldwide TV premiere on CNN tonight at 9 and 11 p.m. EST ― the otherness seems to dissipate and you get a sense that the diverse students being profiled in the documentary that questions the value of a college education are truly America’s students.

The documentary ― produced by Emmy-nominated filmmakers Andrew Rossi and Kate Novack ― represents one of the most comprehensive portrayals of the nation’s higher education enterprise and its collective student body ― and the economic issues that both face in their symbiotic relationship ― that you’ll ever see.

That’s not to say that “Ivory Tower” necessarily breaks new ground. Anyone who regularly follows higher education news will see a series of familiar themes and stories: The skyrocketing of tuition and the declining state contributions to public higher education. College graduates being expelled into a rough job market with grim employment prospects and ridiculous amounts of student debt. The race among institutions of higher learning to have the biggest and the best facilities ― including pools, tanning facilities and the infamous climbing walls ― to attract more students. The lure of campus party life and the unfulfilled promise of MOOCs.

This documentary weaves all of these things together in a compelling and provocative visual way that makes contemporary issues in higher education a bit more interesting to follow than they might otherwise be.

A dominant story that essentially begins and ends the documentary is that of David Boone, a Harvard freshman who hails from one of the most economically distressed neighborhoods in Cleveland and who struggles to make it through Harvard’s introductory computer science course known as CS50.

Boone is cognizant that other students in the class arrive on campus better prepared than he is to make it through the course.

He questions whether he will be able to succeed because he “can’t understand everything right away.”

But when he reflects on the violence-plagued neighborhood that he left back home ― and what will await him if he fails ― he concludes that “because of my path and where I come from, I’m just that much more driven.”

Viewers are also treated to a wide variety of types of education that are presented as alternatives to the increasingly costly four-year residential experience ― from Deep Springs College, an all-male, ranch-based, two-year college in California, to the communal living HackerHouse, part of PayPal founder Peter Thiel’s fellowship that offers $100,000 to students who drop out of college and start their own businesses.

Deep and piercing insights are shown into what it means for a young Black woman to benefit from the Spelman College experience. A few clips show the outrageousness of some of the parties that take place at Arizona State University and how it got to be known as a party school.

But one of the most compelling segments is when the documentary takes you to the front lines of a student protest over the recent decision at Cooper Union to do something that has never been done before in the institution’s more than century-and-a-half of existence: charge tuition.

All the while there is salient commentary from some of most noted and oft-quoted higher education scholars on what all these things mean for the individual bank statements of students and parents, as well as institutional bottom lines.

If you follow higher education news, Ivory Tower is a worthwhile watch because it reinvigorates the discussion about the value proposition of higher education and provokes thoughts about possible solutions. And if you’ve slept on higher education news for all your life, it will bring you up to speed in one sitting ― with commercial breaks ― on why this era represents one of the most crucial crossroads for higher education in the nation’s history.