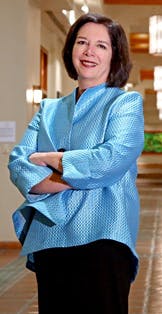 Dr. Eileen T. Breslin is president of the American Association of Colleges of Nursing (AACN) and dean of the School of Nursing at The University of Texas Health Science Center at San Antonio. (Photo courtesy of AACN)

The Affordable Care Act and America’s aging population have created a growing need for primary care providers, which is virtually impossible to meet without nurse practitioners.

In mid-July, the Association of American Medical Colleges reported that a shortage of 45,000 primary care physicians is projected by the year 2020. Stepping in to fill that void — particularly in urban and rural communities — are nurse practitioners (NPs).

In addition to primary care, NPs may specialize in a particular area.

The scope of practice varies by state, but it is indisputable how vital they are in rural communities. According to the American Association of Nurse Practitioners (AANP), more than 18 percent of NPs practice in communities of fewer than 25,000 residents.

“I started my nursing career really blessed by providing primary health care to women in rural areas of Arizona,” says Dr. Eileen T. Breslin, president of the American Association of Colleges of Nursing (AACN) and dean of the School of Nursing at the University of Texas Health Science Center at San Antonio. “We know that we’re more likely to be located in rural areas … than physicians.”

AANP advocates for having restrictions on NPs eased in states that do not allow them to practice to the full scope of their training. Some states allow independent practice; some allow a collaborative agreement with a physician, while some require direct supervision by a physician.

“If you look at where family nurse practitioners are practicing, many of them are in rural areas or they’re in inner-city areas where people have a hard time because of their economic status getting care,” says Dr. Ken Miller, co-president of AANP. “Nurse practitioners prefer to go into those areas and work with the underserved.”

Next year will be the 50th anniversary of the NP. According to AANP, as of June 2014, there were more than 192,000 nurse practitioners in the U.S., which represents a significant increase in recent years. Data collected by AACN from 2008 to 2013 show the number of students enrolled in NP programs increased by 107 percent.

“We have started recruitment programs which are aimed specifically at trying to get diverse cultures involved,” says Miller. “We’re trying to recruit those cultures into our system so that these people can provide care [that] is culturally beneficial.

“What it brings is a sense of satisfaction from the patients,” he adds. “The other thing it brings is a desire in patients to follow through. It keeps people in the [health care] system, keeps them coming back and it also provides the opportunity to provide preventive care, which is something that NPs are actually educated for in their programs.”

“There was a recent study in the Journal of Nursing Education that indicated that most NPs demonstrate substantial use of complementary and alternative medicine in their clinical practice,” Breslin notes.

Programs are also developing curriculum in response to requests from NPs in their communities. At the University of Wyoming, which in 2012 transitioned from master’s and doctoral programs in nursing practice to offering only doctorates (DNPs), there are three courses related to facilitating behavioral change, says Dr. Ann Marie Hart, an associate professor and DNP program coordinator at Wyoming.

“Helping people to make behavioral changes, such as quitting smoking or losing weight, requires a lot of knowledge and skills in order to be successful,” says Hart. “Our graduates will be able to go out and help people in rural communities to make changes.”

NPs provide a significant amount of the primary health care throughout the state of Wyoming, Hart says.

Dr. Harriet R. Feldman, a professor and dean in the College of Health Professions and the Lienhard School of Nursing at Pace University, mentions the prevalence of NPs at women’s shelters and homeless shelters.

Breslin says this fall semester 51 percent of the graduate students at her school are from diverse backgrounds.

While those are encouraging numbers, the nursing workforce still falls short in mirroring the diversity of the American population.

“We try very hard to recruit nurses who are people of color,” says Dr. Gail C. McCain, a professor and dean of the Hunter-Bellevue School of Nursing at Hunter College.

From 1998 to 2003, Breslin served on the National Advisory Council for Nursing Education and Practice. During that time, the Health Resources and Services Administration recommended to Congress proposed action related to Title VIII funding and services for nursing workforce development. She says recent reports show there is still a lack of diversity.

“We absolutely have to have diversity to achieve health equity,” Breslin says. “We have been creating initiatives in order to try and achieve that.

“It is a much more complex world that we live in. Nurses really are the critical linkages. We are exquisitely prepared to provide the care coordination and transitional care for many constituencies,” she adds.

In order to create opportunities for more registered nurses to pursue graduate studies, not only are many NP programs designed for part-time study while a student continues full-time employment, but most include a significant online component so students can study on their own schedules.

“They’re using both virtual classrooms where you have a synchronous connection with students — so that the faculty are on at the same time that the students are on — and courses where they’re doing it asynchronously,” says Miller. “Students go on and they do their work and then the faculty goes on and responds to the work they have been doing. Most programs are a mix of those two things.”

Hart says the University of Wyoming calls its program “distance accessible.” Students are required to come to campus in Laramie a couple of times a semester, but they study online and execute the clinical component of the program at facilities in relative proximity to where they reside.

“They are able to live and work in their rural communities,” Hart notes. “Most of the time, those students end up then working in the communities where they actually were living [while] they were in the program.”

Experts say, to give NPs maximum effectiveness, it is essential that state restrictions on independent practice are lessened. Resistance to such changes often comes from physicians, who argue it would diminish quality of care.

“In fact, we have a whole body of evidence indicating otherwise,” McCain says. “In some cases the studies showed that patients are more satisfied with care from the NP than the physician.”

While NP isn’t a new profession, it is clearly emerging at this point in time and will — given the opportunity — be on the forefront of health care in the U.S.

“My hope is that we seize the opportunity and continue to demonstrate the value that we bring to the workforce,” Feldman says, adding that Pace’s health care for students, faculty and staff is nurse-managed care. “I hope that we continue playing this important role and we continue to gain recognition for it.”