Half of High-risk Students Coming Up Empty 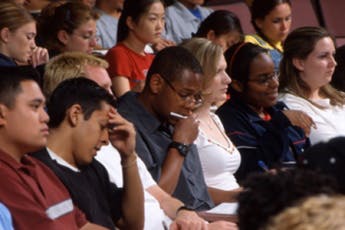 Roughly half of high-risk students are starting college but have nothing to show for it in terms of earnings because they leave without a credential that could command a higher salary.

Such is one of the key findings of “The New Forgotten Half and Research Directions to Support Them,” a new report by James Rosenbaum, education professor and chair of the program on poverty, race, and inequality at the Institute for Policy Research at Northwestern University.

The report — which is meant to update a 1988 report called “The Forgotten Half,” which probed life chances for students who weren’t going to college — is meant to update that research and sound the alarm for a “new college reality” regarding students’ chances of completing college.

It is also meant to focus on ways to get more students to pursue alternative options whereby they at least earn a credential even if they never earn a degree, Rosenbaum said in an interview with Diverse.

“I would say college offers several different credentials, and some of them you could get quickly and get them on the way to getting further degrees,” Rosenbaum said when asked to explain the “new college reality” for students.

“If you feel you’re at risk of having your college career interrupted, it may be a smart to plan to get a short-term credential on the way,” Rosenbaum said.

Rosenbaum’s report statistically sketches earnings for students based on whether they started school at a two-year or four-year college. It finds varying payoffs for students who earn credentials that range from graduate degrees to certificates, but no earnings payoff for students who have completed “some college.”

“When that happens, that means when they go to the labor market they can say, ‘I attended this college,’ but they don’t have a credential to show for it,” Rosenbaum explained. “What I’m saying is we really need to let students know that they have alternatives, particularly for high-risk students. They should know there’s another option that will give them an extra earnings payoff.”

Rosenbaum’s report notes that while students with “some college” might be assumed to have inferior prior qualifications than certificate graduates, there is “little evidence” that such is the case.

“In fact, students with ‘some college” have similar or better characteristics on many dimensions as those who complete certificates or associate’s degrees,” the report states.

Rosenbaum compiled a table that shows 2011 earnings by various categories, including level of postsecondary education completed.

The table shows that 2011 earnings were:

• 3 percent lower for students who only completed “some college.”

In another table, it shows that 51 percent of community college starters with low test scores had only achieved “some college.” The figures were 42 and 44 percent among middle and high scorers, respectively.

At four-year colleges, 45 percent of low test scorers had only completed “some college.” But the figures were 26 and 15 percent among middle and high scorers, respectively.

Rosenbaum said students who only got “some college” would be better off if they had been made aware of various credentials short of a degree that could lead to better-paying jobs.

“We’ve looked at some of those jobs. They’re meaningful jobs. They are important jobs,” Rosenbaum said. For instance, he said, a surgical assistant position may require a one-year certificate.

Rosenbaum’s report recommends doing more to describe the “new college reality and its full range of options, odds and outcomes.” He also recommends more research to understand the role that counseling and guidance can play to help young people make better postsecondary decisions.

He also recommends “institutional reforms” such as better school-work linkages.

“Four-year colleges are not now set up for this and need to consider it, particularly if they’re taking a lot of students who have lower test scores,” Rosenbaum said. “The risk is that the four-year colleges are taking students with lower test scores, they get a lot of tuition out of them but have nothing to offer them if they end up dropping out.

“I don’t think anyone wants that.”