Platt a Groundbreaker in Emerging Field 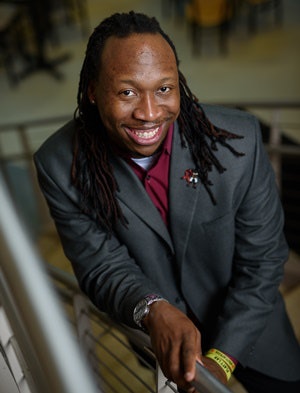 As an assistant professor in a biomedical engineering department run by Georgia Institute of Technology and Emory University, Dr. Manu Platt, a Diverse 2015 Emerging Scholar, has managed in a short time to reach the upper ranks of researchers working in this emerging field.

More than four years after the National Institutes of Health (NIH) awarded Platt a $1.5 million NIH Director’s New Innovator Award, the 35-year-old professor not only continues to make scientific progress, but remains committed to excelling as an educator and humanitarian.

With the New Innovator Award, Platt gained valuable support for the research he had pioneered around reducing strokes in children with sickle cell disease. In addition to sickle cell research, Platt has brought computational and other experimental technologies to better investigate HIV-mediated cardiovascular disease and cancer metastasis.

­The HIV-mediated cardiovascular research has focused on gaining stronger mechanisms for understanding accelerated progression of cardiovascular disease due to HIV infection. Platt has secured significant funding from the NIH and the International AIDS Society to support the research, and has launched a major research partnership with the University of Witwatersrand in South Africa on HIV-related work.

“He has broad scientific interests,” says Dr. J.K. Haynes, the David Packard Professor in Science and dean of the Division of Science and Mathematics at Morehouse College.

“[Platt] works on sickle cell anemia … He also works on HIV. And I think this is related to his strong community interests,” says Haynes, who taught Platt as an undergraduate. “He wants to do research of benefit, in particular for folks who are underrepresented.”

­The university recognized Platt and Project ENGAGES (Engaging New Generations at Georgia Tech through Engineering and Science) with a diversity champion award in 2013. Platt is a co-founder and co-chair, along with Georgia Tech professor Robert Nerem, of Project ENGAGES.

“I’ve seen him from the research context, but also he and I together now run a joint program with high schools in the inner city of Atlanta, bringing junior and senior African-American high school students into our laboratory to do research on a year-round basis,” says Dr. Robert Nerem, the Parker H. Petit Distinguished Chair for Engineering in Medicine and Institute Professor Emeritus at Georgia Tech.

Platt credits Nerem for having recruited and mentored him during his senior year at Morehouse College to apply for the newly forming Georgia Tech-Emory University biomedical engineering program. He would be among the second cohort of Ph.D. students to complete the new program.

A few years later, as Platt neared completion of his Ph.D. program, Nerem helped arrange a postdoctoral fellowship at MIT that would enable the young researcher to eventually return to Georgia Tech and become a faculty member in the biomedical engineering program.

The son of a retired Air Force veteran father, Platt says his interest in biology and engineering dates back to his middle and high school years in Dover, Delaware. He took great satisfaction from math and science enrichment study he encountered in an engineering career prep program offered then by Delaware State University.

At Morehouse, Platt intended to complete a dual degree program in biology and biomedical engineering, but largely followed a biology and math path that included NASA summer science internships.

Currently up for tenure, Platt will learn this spring whether he becomes an associate professor. He says he is optimistic about his chances and he hasn’t worried about having overcommitted himself to academic and community service obligations that might detract from his research productivity.

“I knew I had to go in and publish quickly and bring in the support for research,” says Platt. “I enjoy doing the other [service] activity and that has been a sustaining factor for me.”