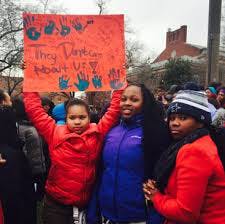 Students at Howard University Middle School of Mathematics and Science (MS)2 were joined by students from the main campus Tuesday as they protested the recent departures of (MS)2 social studies teachers.

According to reports, the teachers gave their two weeks’ notice after conflicts over the curriculum arose at the school. Their effective collective resignation date was to be Feb. 5, but Principal Angelicque Blackmon told the teachers during the school day Jan. 27 that she was accepting their resignations, effective at that moment.

Many reported that the teachers were being fired for teaching Black history, but Ciara Chase, an eighth grade student at (MS)2 and one of the organizers of the protest, said it was not necessarily Black history that landed the teachers in hot water; the sometimes Pan-African lessons, mixed with discussions of the recently deceased Marion Barry and conversations about Kwanzaa principles drew sharp criticism from the school’s administration, Chase said.

As (MS)2, which is under the direction of D.C.’s charter board, and not the direct supervision of Howard University, began to transition with the rest of the country to the Common Core curriculum, Chase said teachers at the school were not receiving adequate training to transition them to the new curriculum.

“They were not teaching the curriculum to [the administration’s] standards,” said Chase. “They just kept teaching the way they had always taught,” because they didn’t know anything else.

The students, already frustrated by high turnover rates and what they perceived to be a lack of availability and accessibility by their principal, organized a protest.

“This wasn’t the first problem we had with the school, but it was the breaking point for us, because those were the teachers that really kept us together,” said Chase.

“The teachers that left are the ones that taught them about protesting and civil rights,” said Marlena Edwards, Chase’s mother. “It wasn’t just the academics, it was the emotional connection” the teachers had been able to forge with students, many of whom had few other outlets, she said.

First, on Jan. 27, they opted for a silent protest to honor their teachers. One of the lessons the teachers had taught them was about the value of peaceful protests and order, not chaos, as a way to make a point. So, on Jan. 27, students were silent during the school day, in a show of solidarity with their departed teachers.

Then, because the students still had not been granted a meeting with Blackmon, they decided to organize a higher-level protest. Armed with a list of demands — among those included: “new social studies teachers who will be treated with respect”; a “more visible,” “less antisocial” principal who built relationships with students and their parents; better education; positive acknowledgement from administration; a clearer understanding of the academic objectives; for the school to “stop tracking students for school to prison pipeline” and overall more justice in their education — the students gathered at the flagpole outside of the school Feb. 2.

People from around the country, Howard and other HBCU alumni as well as just concerned citizens expressed their support on social media using the #ms2protest hashtag. And, according to Chase, the students feel they accomplished their goal.

“We did get to talk to the principal and we think we have a way to move forward,” she said. The students now have elected representatives [of which Chase is one] who will meet with Blackmon biweekly to discuss student concerns. The students have been able to remain in contact with their departed teachers, though there are still the issue of the large number of substitutes, due to the many mid-year departures of the social studies teachers and several other instructors.

Chase said Blackmon held a parent meeting and “issued an open apology for handling the situation unprofessionally” by relieving the teachers of their duties in front of students.

“I really do think that this is going to be good, because we’re going forward,” Chase said, noting that, although this is her last year at the school, she is optimistic for the relationship with administration being left for those coming behind her.