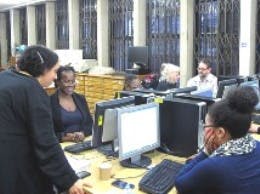 The Schomburg Center for Research in Black Culture is nationally recognized as a preeminent research library and archive repository that has been a fixture in New York’s famed Harlem community dating back to the early 20th century.

This branch of the New York Public Library continues to serve the city, not only as a research institution, but also as a community center at which residents, researchers, and tourists gather to observe and participate in Black historical and cultural events.

On Feb. 7, the first Saturday of Black History Month 2015, the Schomburg Center is hosting the Black Life Matters Wikipedia Edit-a-thon. This weekend’s edit-a-thon is one of several occurring this February as part of the first-ever Black WikiHistory Month observance in the U.S.

Black WikiHistory Month edit-a-thons are open to anyone interested in editing and writing Wikipedia reference articles pertaining to Black historical figures and events.

In New York, expert volunteer Wikipedia editors along with Schomburg Center staff members will be training participants on how to properly edit and write Wikipedia articles in the hopes of spurring them to contribute to the free, Internet-based encyclopedia. Other New York-area Black WikiHistory Month edit-a-thons are scheduled this Saturday at the Brooklyn Public Library and Purchase College in Purchase, New York. Additional edit-a-thons this month covering Black history are taking place in Washington, D.C. and Nashville, Tennessee.

By Thursday, the Schomburg Center had closed its edit-a-thon registration after reaching full capacity of 200 participants. “The response we’ve gotten has been tremendous. It’s really been wonderful,” said Maira Liriano, the center’s associate chief librarian.

“The Schomburg Center is taking upon itself to encourage people to come to the center so that we can crowdsource Wikipedia; we can improve entries; [and] we can add entries where there are none for historical figures of African descent who help to make this world what it is,” said Dr. Khalil Gibran Muhammad, the Schomburg Center director, during a televised Huffington Post interview.

“It’s critically important because Wikipedia is the Encyclopedia Britannica of [the] millennial age for young people. I have three children myself and any time they Google something Wikipedia is likely to be the first hit and they take it as authoritative,” Muhammad told Huffington Post interviewer Nancy Redd.

Liriano explained that the Black WikiHistory Month edit-a-thons are intended to bring more diversity to Wikipedia pages, with people of color included both as subjects of articles and as contributors.

“There’s so much going on right now related to the absence of Blacks online and the social activism that’s happening now. People are taking to social media and that’s trickled into this realm of Wikipedia,” she told Diverse.

As one of the organizers of the Schomburg event, Liriano had worked on a library edit-a-thon prior to her current job that focused on New York City neighborhood history. She believed the idea would transfer well to the Schomburg Center as well as address Wikipedia’s missing Black history. “Libraries have been aware of Wikipedia [and] maybe we’ve been in competition with it to some extent,” she said.

“But instead of fighting [it],libraries almost from the beginning have wanted to be in partnership with, or have a hand in Wikipedia, recognizing its real value as a source of … information about subjects that is hard to find anywhere else,” Liriano noted.

Katherine Maher, the chief communications officer of the San Francisco-based Wikimedia Foundation, said that the foundation, which supports Wikipedia development as an Internet-based encyclopedia format, welcomes the focus by Wikipedia volunteers and institutions, such as the Schomburg Center, to increase the inclusion of Black history content within Wikipedia articles.

While visiting New York this week, Maher will be among the volunteers participating in the Black Life Matters Wikipedia Edit-a-thon.