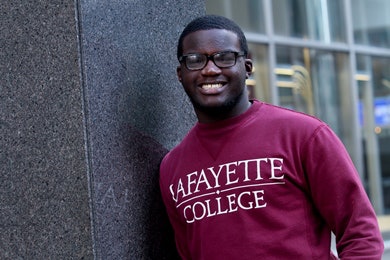 Scholarship recipient Christopher Felix says there were only two or three counselors at his high school, where student enrollment was about 3,000 students.

PHILADELPHIA — When Christopher Felix used to attend a weekly after-school class as part of a college access organization called Philadelphia Futures, his classmates would tease him about having to go to school “again” once school let out.

“A lot of people, when they’d see me going to Philadelphia Futures, they’d be like, ‘You’re going to more school,’” Felix recalled of his classmates at Northeast High School. “They’d be like, ‘For what?’”

Now, Felix has an answer that puts that question to rest — a full-ride scholarship to Lafayette College, a small, private and selective liberal arts college in Easton, Pennsylvania.

That’s his reward for sticking with “Sponsor-A-Scholar,” the flagship program at Philadelphia Futures that provides, among other things, personalized college counseling, mentoring, academic support and up to $6,000 for college expenses.

Tuition at Lafayette College is close to $47,000. Felix’s scholarship aid exceeds that amount.

“I really enjoy the fact that it has paid off,” the 18-year-old Felix, now a freshman at Lafayette, told Diverse.

The organization spends about $2.8 million per year to serve upward of 500 students, according to records and program officials. Students accepted into the program have mostly A’s and B’s, although those grades don’t necessarily translate into high SAT scores, program officials say.

Laura Perna, an education professor at the University of Pennsylvania and an expert on college access organizations, has been familiar with Philadelphia Futures since 2005, when leaders of the organization contacted her to discuss effective research-based strategies for improving college access and success for students from groups that are historically underrepresented in higher education.

“Philadelphia Futures has a well-deserved positive reputation for the services and programs that it offers,” Perna said.

Because of its high cost, program officials do not purport that the organization’s programming is scalable. But they say it still fills a crucial void in Philadelphia, where a dearth of traditional school-based counselors in the public schools deprives students of meaningful assistance in the college search and application process.

Felix says there were only two or three counselors at Northeast High School, where student enrollment approaches 3,000 students.

“So the problem with that is the counselors would obviously try and help. They’d say, ‘Come to my office if you need a recommendation.’ It just definitely wasn’t easy for them to do that,” Felix said. “Having Philadelphia Futures, I was able to get personal help and guidance for applying to college.”

“It’s very challenging for schools to recruit in Philadelphia because of the lack of guidance counselors and other professional staff,” Santos said. “We are exposing students to colleges that they might not otherwise have known about that might not have been on their radar.”

Felix says he never would have gotten connected to Lafayette without Philadelphia Futures, which has a partnership with the college and several others throughout Pennsylvania.

“When I started high school, the only schools I was looking at [were] Temple and Penn State,” Felix said. “Lafayette wasn’t even on the radar.”

Around 10th grade, an adviser at Philadelphia Futures said to Felix, “I have a really good school for you.” The adviser was referring to Lafayette College.

“I said, ‘Lafayette College?’ I had never even heard of this school before, so I’m not gonna even think about it,” Felix recalled of his thinking at the time.

But when senior year arrived, Felix ended up applying to Lafayette because of its partnership with Philadelphia Futures.

Santos says the partnership involves cooperation in the admissions process.

When Felix’s acceptance letters and financial aid packages came in, the decision was easy. Whereas Penn State and Temple only offered Felix only a fraction of the tuition at either school, Lafayette offered enough to cover the entire cost of tuition.

“When I look at it, after the four years, it’s an institution that has invested a quarter of a million dollars in me,” Felix said. “With this scholarship, I’m able to just stay focused on school and have fun.

“I don’t need to be worrying about when do I have to pay this, do this, do that,” he continued. “It gives me room to come to college, get educated, make mistakes, learn from those mistakes and move on from there.”

Felix said the scholarship also relieves a huge burden from his mother, a Haitian immigrant who works as a certified nurse’s assistant at a nursing home.

He credits his mother with doing the best she could to encourage Felix and his older brother to do well in school.

But when it came to helping with homework or searching for a college and paying for it, there was not much she could do. That’s where Philadelphia Futures came in.

Felix first got acquainted with the organization when his older brother became involved.

He remembers how welcome he felt when his mother and brother went into a separate room to talk and he remained in the lobby.

“I was being talked to by staff people,” Felix recalls. “At that point, I knew I wanted to be in Philadelphia Futures because as soon as I walked through that door and talked to the coordinators it felt very homely. I felt I could very much get into the program.”

Officials at Philadelphia Futures say the vast majority of their students get accepted to college. The organization places a premium on finding the right fit.

Though Lafayette College has been designated as an “engine of inequality” because very few of its students come from working-class and low-income family backgrounds, Felix — who reports a 3.68 GPA and plans to double major in sociology and psychology — is having the time of his life.

“People are very friendly here,” Felix says. “Where I come in Philadelphia, if you walk down the street, you wouldn’t expect people to stop and say, ‘How was your day?’

“When I’m on campus here and walking across the quad or out of the library, someone might stop and say, ‘How are you?’ or sit down at my lunch table. It’s very easy to make friends here. It’s not really easy to get homesick here.”

Philadelphia Futures also focuses on helping students complete college — something the organization says nearly 60 percent of its students do. Students have mentors that stay in touch with them throughout their college years.

According to Santos, the support that Philadelphia Futures provides to students throughout college is one of the things that make the organization distinct and that appeal to its partner colleges and universities.

“There are many organizations that help students get into college, and partnerships with colleges in those cases are great,” Santos said. “But one of the things colleges like about Philadelphia Futures — and why I think our partnerships have been successful — is we’re also responsible for helping to make those students successful in college.”