Report: U.S. Millennials Not Measuring Up vs. International Peers 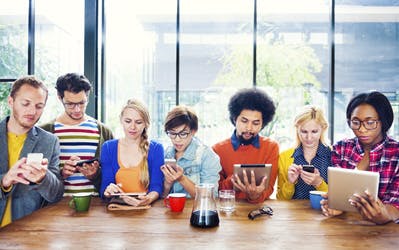 Calling the situation a “clear cause for concern,” ETS on Tuesday released a new report that shows the skills of America’s so-called “millennials” are “comparatively weak” in relation to their international peers.

And it’s not just because of disparate skill levels among different segments of the U.S. population — as bad as that would be if that were the only reason.

Rather, the report notes that even the top-scoring and “most-educated” U.S. millennials are trailing behind similarly situated millennials in most other participating Organisation for Economic Co-operation and Development, or OECD, nations when it comes to skills in the realms of literacy, numeracy and problem-solving in “technology-rich environments.”

“The data reveal that in relative terms, our millennials do not perform favorably in comparison to their peers internationally,” states the report, titled “AMERICA’S SKILLS CHALLENGE: Millennials and the Future.”

“This holds true even for our best performing and most educated millennials, those who are our native born, and those with the greatest socioeconomic advantage,” the report states.

More specifically, the report on millennials — or those born after 1980 — shows that:

• Even though a greater percentage of young adults in the United States have been attaining higher levels of education since 2003, the numeracy scores of U.S. millennials whose highest level of education is “high school” and “above high school” have declined, from 264 to 247 and from 296 to 285, respectively, on a 500-point scale.

• The percentages of U.S. millennials scoring below Level 3 in numeracy — the minimum standard — has increased at all levels of educational attainment since 2003.

• U.S. millennials with a four-year bachelor’s degree were outperformed by all other participating OECD countries except Poland and Spain.

• The scores of U.S millennials whose highest level of educational attainment was high school or less were lower than those of their counterparts in almost every other participating country.

• The “best-educated” millennials — those with a master’s or research degree — were outperformed by their peers in all other OECD nations except for Ireland, Poland and Spain.

The U.S. performance looks bleak even when disaggregated along demographic lines. For instance:

• Across all levels of parental educational attainment — which was strongly correlated with skills in all countries — there was no country where millennials scored lower than those in the United States.

• The gap in scores between U.S millennials with the highest level of parental educational attainment and those with the lowest was among the highest of the participating countries, at 61 points, compared to other countries such as the Republic of Korea, Ireland and Finland, where the gap is as low as 20, 27 and 30 points, respectively.

The authors of the report contend that the data show a need to shift the focus away from just what type of postsecondary credentials a person has earned and more toward the skills that a person has acquired.

“Just graduating people where the economy isn’t correlated to the skills that people have is no help at all,” said Madeline Goodman, an ETS researcher and one of the co-authors of the report.

“It’s a broader problem,” Goodman said in an interview with Diverse. “We need to recalibrate and focus on skills as well as attainment. It isn’t an either-or proposition.”

The report makes note of what it refers to as a series of “contradictions” in American education. For instance, it notes how the United States is a nation that “spends more per student on primary through tertiary education than any other OECD nation,” and yet “systematically scores low on domestic and international assessments of skills.”

“And a nation with some of the most prestigious institutions of higher learning in the world houses a college-educated population that scores among the lowest of the participating OECD nations in literacy and numeracy,” the report states.

The report tackles the issue of disparities in educational achievement along lines of race and ethnicity. It also points out that while Whites and Asians tend to outperform Blacks and Hispanics domestically, they still trail behind their peers internationally.

The report urges education leaders and policymakers to “carefully examine what kinds of post-secondary education and training are leading to increased skills, and which are not — especially in a climate such as in the U.S., where this education is largely privately funded and so many young adults are putting themselves at risk financially to obtain it.”

“If fewer individuals have access to quality post-secondary education that provides in-demand skills and higher wages, we will more likely compound inequity than alleviate it,” the report states.