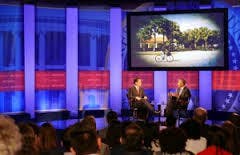 MIAMI — When it comes to immigration, Julio Calderon hasn’t always agreed with President Obama and his administration’s policies.

But even Calderon, a graduating senior at Florida International University (FIU) and an immigration activist, had to concede that history was made Wednesday when he and other undocumented students were seated just a few feet away from the commander-in-chief.

“It was historic,” said Calderon, who fled with his family to the U.S. from Honduras nine years ago. “It was a great opportunity to get to see the president even though I’m undocumented.”

Calderon sat with a crowd of about 240 people in an auditorium at FIU, as Obama outlined his views on immigration and pushed an ambitious plan for undocumented students for the last year of his administration.

Even as many Latinos are sharply divided over some of Obama’s immigration policies, he was greeted with a warm reception at the town hall meeting moderated by Jose Diaz-Balart, a television anchor with the Spanish-language network Telemundo.

“We live immigration in this community,” FIU President Mark Rosenberg told the audience before Obama took the stage. “So this is the appropriate place to have this conversation.”

Earlier in the day, the president met with immigration advocates at the White House to discuss the status of his executive actions. The meeting followed a decision by a Texas federal court judge to block implementation of Obama’s programs, which would have extended relief from deportation to young undocumented immigrants, or DREAMers, brought to the U.S as children as well as to undocumented parents of citizens or legal resident children.

On Capitol Hill, Republicans have argued that the president overstepped his constitutional authority when he took steps to shield more than 4 million immigrants from deportation and make them eligible for work permits.

Congresswoman Frederica S. Wilson, a Democrat who represents South Florida and traveled to Miami aboard Air Force One with the president, lauded his efforts.

“President Obama’s immigration plan would give millions of undocumented immigrants an opportunity to come out of the shadows to get an education and become law abiding and tax paying citizens,” she said. “We must not let partisan politics stand in the way of what is morally right.”

For his part, Obama used his appearance at the town hall meeting to try to win over support from a demographic that Democrats will need if they are to hold on to the White House in 2016.

“We’ve had a system for a very long time that nobody is happy with,” Obama said. “People recognize this was the right thing and the smart thing to do.”

He said that he will veto any congressional bill that seeks to undermine his efforts to bring about immigration reform.

“Latinos will be paying attention,” said Calderon, who is active with Students Working for Equal Rights (SWER), an organization that advocates for undocumented students. “If whoever is running is going to try to deport us, they will not get our support.”

Fortunately for Calderon, he hasn’t been saddled with outrageous tuition costs like some of his friends who attend other state schools and are forced to pay out-of-state costs because of their undocumented status.

But even with the in-state tuition that he pays to attend FIU, Calderon does not qualify for grants or other federal financial aid, and the scholarships that he can apply for are quite limited.

“I’m trying to get good grades and when I graduate, hopefully get a job and work off the books so that I can save enough money to go to law school,” Calderon said. “To think of what I am going to do after I graduate, having the degree, being prepared and not have the job opportunity. It hurts a lot. I feel like an American, I just need to be recognized as an American.”