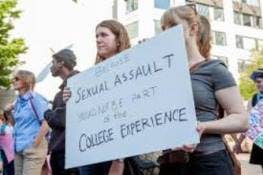 Although nearly 1 out of every 30 female freshmen experience sexual victimization during the first four to six weeks of college, the number could be reduced if more students were taught to assume an “active bystander” posture when they witness sexual abuse, harassment or assault.

That is one of the key takeaways from a new survey released recently by EverFi, an education technology company that teaches “critical skills” to institutions of higher education and K-12 schools.

The survey — titled “Sexual Victimization and Social Norms on the College Campus” — comes at a time of intense national discussion about the best ways to combat the persistent problem of sexual assault at America’s colleges and universities.

The 1 in 30 figure — considered higher than the 6.1 per 1000 female students age 18 to 24 figure released by the U.S. Department of Justice but lower than the “1 in 5” statistic reported in The Campus Sexual Assault Study — is meant to be a gauge of the extent of the problem on campus and to enlighten administrators on the best way to fight it, an EverFi research says.

With regard to such, the survey reveals a substantial gap between “actual norms” and “perceived norms,” that is, the difference between students’ willingness to intervene if they witnessed sexual victimization versus how likely they thought their peers would be to do the same.

Eighty-one percent of students indicated they are willing to intervene but only 55 percent thought their peers would do the same the survey found.

“The problem with having a difference between these two norms is that students are less likely to intervene or report an issue if they believe their peers wouldn’t do the same,” Dan Zapp, director of research at EverFi, told Diverse.

“The more students feel as if they might be rocking the boat or drawing negative attention to themselves, the less likely they are step up and say or do something because they feel their peers might look down on them,” Zapp said. “Research actually supports that the more they feel supported and respected by stepping up by their peers, the more likely they are to take action.”

To the uninitiated, the term “active bystander” may sound like a bit of an oxymoron. Zapp noted that, in sexual assault prevention research, a bystander refers to “any person who feels they are witnessing abuse, harassment or assault.”

“It is then up to that student to decide whether or not to actively insert themselves into that situation either physically or verbally,” Zapp said.

But just how to intervene is an altogether different question.

During her trainings at university campuses, she uses a six-step “active bystander” protocol developed by Michigan Institute of Technology. Among other things, the protocol involves a “gut check” as to whether something is amiss, the consequences of action or inaction, and consideration of “low-risk” options.

One news account states that “a crowd gathered around as Vandenburg pulled up to the dorm in a vehicle with his unconscious date.”

“At least five students later became aware of the unconscious woman in obvious distress, but did nothing to report it,” the news account states. “Rumors quickly spread around campus, and still no one apparently reported it.”

Anderson said students had a range of ways in which they could have intervened, including:

• Never allowing the woman to leave a party so intoxicated;

• Stopping the males outside the dorm and coming to the aid of the female student;

• Stopping the students in the hallway.

“Now, the woman faces a possible lifetime of emotional scars and the two male students face 15 to 80 years in prison,” Anderson said, noting that the perpetrators will be sentenced on March 6. Two other students are charged in the case but have yet to stand trial.

The EverFi survey also uncovered that victimization rates increase as students continue their studies, “suggesting that time spent in college is a risk factor for victimization.”

Indeed, by the time female students were seniors, the number who indicated they had been sexually victimized after arriving on campus grew from 3 percent to 9 percent, according to the survey.