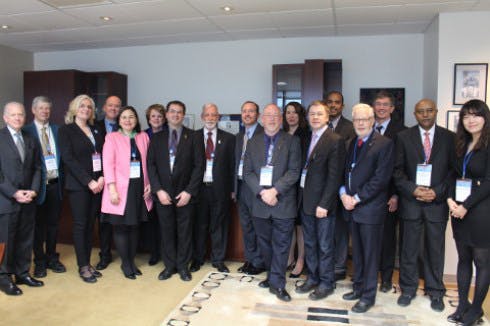 New York — Even though Ethiopia has substantially grown its number of public universities over the past decade, the country’s institutions of higher education could still benefit from partnerships with universities in the United States to battle pathogens that impact the people of Africa’s second most populous nation.

“There’s a big vacuum for knowledge,” said Wondwossen Gebreyes, Professor of Molecular Epidemiology and director of Global Health Programs in the College of Veterinary Medicine at The Ohio State University.

Gebreyes said the number of universities in Ethiopia has grown from three when he left the country in the mid-1990s to more than 30 within the past decade.

Gebreyes made his remarks recently at an Institute of International Education conference on best practices in campus internationalization.

The Ohio State University won an honorable mention award from IIE for its Global One Health program. The program entails a number of initiatives that Gebreyes said provide students with opportunities to get on-the-ground experience that they could not get on campus.

“We are exposing them to problems that we do not have in the U.S. today but also giving them the global perspective,” Gebreyes said. “We are changing the way they see the world.”

The hallmark of the One Health program is a summer institute that began in 2011 with three courses and a few faculty members. It has since grown to become a 16-course initiative with 28 faculty and staff from OSU and 32 students, Gebreyes said.

“These issues are also priorities for OSU,” Gebreyes said.

Gebreyes spoke of an OSU program to prevent and control diseases such as rabies and tuberculosis.

“Rabies is killing a lot of people in Ethiopia,” Gebreyes said, noting that rabies is “an easy thing to prevent and control” through efficient vaccinations and education.

“So we said: Let’s take this as a priority,” Gebreyes said.

Recently, he said, OSU developed a “roadmap process” to fight rabies that he said could serve as a model to fight other infectious diseases.

Cervical cancer is also a huge problem in Ethiopia, but the nation only has four oncologists to serve its 91 million people, Gebreyes said.

“There’s a huge, huge gap,” he said in describing an OSU program that is meant to help fill the void by offering screenings for cervical cancer.

A separate program offers rapid tests for tuberculosis, which he said are lacking in subsaharan Africa. The tests have been modified to test milk because milk-borne tuberculosis is a major problem in the region. He said the approach “seems to work.”

Andrew Gillespie, Assistant Provost for International Programs at Auburn University, described how Auburn developed the Auburn University-Keimyung University Korea Center in order to build relations with the region’s growing Korean community, which is related to the rise of Korean automakers in the region.

“When I came to Auburn, they had no contact with this industry and had not developed programs to have the university interact with that community,” Gillespie said.

But the Korean Center “seeks to reverse that trend” and get the university “highly interactive” with the Korean community and Korean automakers.

Cultural activities have included a “Korean Week” that features Korean language and food. But the university is also forging partnerships with the Korean automakers to develop automotive engineering programs, which Gillespie described as a “natural progression” of the university’s relationship with Korean automakers in the region, such as Kia and Hyundai.

Vera Galante, the Institute of International Education representative in Brazil, spoke of a desire to get more U.S. students to study in Brazil.

Currently, she said, there are about 13,000 students from Brazil studying in the U.S., but only about 4,000 U.S. students studying in Brazil.

Galante offered a series of tips on best ways to form partnerships with Brazilian institutions of higher learning. Among other things, Galante said U.S. university leaders should spend time getting acquainted with the needs of Brazil’s states.

Most Brazilian states have their own research foundations with funds for exchange, she said.

“Some will focus more on the STEM field,” Galante said. “Others don’t care. They will fund whatever is exchanged.

“Each state focuses on what’s best for that state,” she said. “It’s a matter of finding the right match for your institution.”