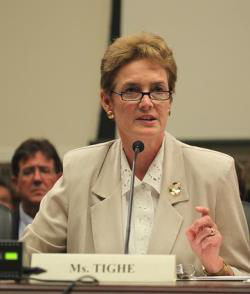 Kathleen S. Tighe, inspector general of the Department of Education, said the Office of Federal Student Aid is “one of the largest financial institutions in the country.”

James Runcie, COO of the Office of Federal Student Aid (FSA), reported Wednesday that the agency administered approximately $127 billion in aid and loans to students in fiscal year 2015 and holds $1.2 million in student loan debt.

Runcie told the House of Representatives Education and Workforce Committee that the operations of the government agency tasked with managing every federal loan, grant, work study, and repayment program under Title IV of the Higher Education Act “had expanded considerably since 2007.”

Kathleen S. Tighe, inspector general of the Department of Education, noted at the hearing that FSA delivered $82 billion in student aid in 2008.

“During the same time period, the portfolio of federal loans has grown from $359 billion to more than $1.2 trillion, making FSA one of the largest financial institutions in the country,” she said.

Ben Miller, senior director of postsecondary education at the Center for American Progress, put it in more concrete terms. “If FSA were a bank, it would be roughly the size of Citigroup in terms of assets it owns or guarantees,” he said.

As it is structured now, the FSA is a “performance-based organization,” or PBO, meaning that it has greater discretion and latitude in areas such as hiring and equipment acquisition. In return, the FSA is expected to operate efficiently and keep costs low.

While the agency is effective at getting aid and loans to students, as the trillions that have been disbursed so far would seem to indicate, witnesses said that FSA has other areas where it can improve. “The challenge is to encourage better oversight of institutions, servicers, lenders, and other contractors, and to provide the public and policymakers with increased data and transparency,” Miller said.

On Wednesday morning, the Government Accountability Office (GAO) released a report on the relationship between FSA and contractors, which found that “instructions and guidance to loan servicers are sometimes lacking, resulting in inconsistent and inefficient services to borrowers,” according to written testimony from the GAO. James Runcie, FSA CEO, said that FSA operates via a public-private partnership with 1,200 federal employees and more than 10,000 contracted employees.

Melissa Emrey-Amras, director of education at the GAO’s education, workforce, and income security team, said that the lack of consistent guidelines had a direct impact on borrowers. “Basically, servicers treat borrowers differently. So you could have the same borrower with the same financial circumstances and they might get completely different advice depending on which servicer they contact,” she said.

Emrey-Amras said that FSA failed to provide some servicers with guidelines on how to process over or under loan payments, and how to process different types of income documentation. To address these issues, GAO recommends that the FSA create a basic operations manual for loan service providers to follow, she said. The GAO recommends that FSA “review and improve how it provides instructions and guidance to servicers,” according to the report out on Wednesday.

At the hearing, FSA also came under scrutiny for not sufficiently educating graduates about available income-driven repayment plans, which allow borrowers to cap their loan repayments to certain percentage of their income. Most federal income-repayment plans limit the payment to 10 to 15 percent of a borrower’s income. After a number of years, typically anywhere from 10 to 25, depending on the plan, the remainder of the debt may be forgiven.

James Runcie, FSA CEO, said that in recent years there has been uptick in the number of borrowers now availing themselves of income-repayment plans, a development that he categorized as “phenomenal.” “A lot of that [change] has to do with: we’ve had targeted email campaigns, we’ve changed the incentive structure for our servicers, we’ve created websites with information about our income based repayment, we’ve worked with Treasury and Intuit in terms of mechanisms and activities that create awareness around these programs,” Runcie said.