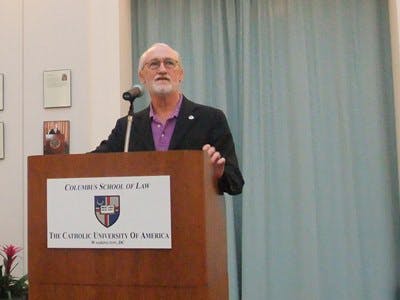 As Catholic University of America (CUA) law student Nicole Conte worked on a federal clemency petition for Kevin McDonald, it wasn’t long before she concluded that the convicted drug trafficker — who had been sentenced to life in prison — deserved a shot at freedom.

“He had no history of violence and a very minor criminal history,” Conte said. “He was also the only person in the drug conspiracy to exercise his right to trial and the only person sentenced to life in prison, a sentence that not even the leader of the conspiracy received.”

Conte’s work on McDonald’s petition paid off in a major way last month when McDonald became one of 95 drug offenders who got their sentences commuted by President Barack Obama.

Whereas McDonald, 38, had been sentenced to life in prison in 2005 for conspiracy to distribute crack cocaine, he is now set to be released in December 2016.

“I was overjoyed for Mr. McDonald and his family,” Conte told Diverse. “For Mr. McDonald to be one out of tens of thousands who applied for clemency was humbling, but his case was a deserving one, one that I believe embodies the need to reduce coercive plea bargaining and inflexible sentencing.”

Conte helped score the legal victory as part of the CUA Law/Ehrlich Partnership on Clemency, a partnership between Catholic University and former Maryland Gov. Robert L. Ehrlich Jr., an attorney who has long championed the cause of clemency.

But ultimately, McDonald’s freedom was secured through the partnership’s collaboration with Clemency Project 2014, an independent initiative launched after U.S. Deputy Attorney General James Cole asked the lawyer profession to provide free legal assistance to federal prisoners who would likely have received a shorter sentence if they had been sentenced under today’s federal sentencing guidelines, which, thanks to the Fair Sentencing Act of 2010, have made penalties for crack cocaine less harsh than they had been previously.

CUA’s Columbus School of Law is one of 30 law schools involved in Clemency Project 2014.

The project screens clemency applications of drug offenders who meet certain criteria, such as having no violent history, no significant criminal history and having served at least 10 years of their sentence.

McDonald said he appreciated the chance to be reunited with his children.

“I can’t express how all this has made me grateful for people other than myself who are not selfish and continue to help people any way they can,” McDonald wrote in an email from FCI Jesup, a federal prison in Southern Georgia, to CUA law professor J.P. “Sandy” Ogilvy, director of the Innocence Project Clinic & Clemency Project at CUA.

“It’s been one of the most joyful days that I can remember in a long time,” Ogilvy said.

Ogilvy said Clemency Project 2014 is part of a welcome reversal of “Draconian” sentencing practices that emerged as part of the nation’s war on drugs.

“So young men in their 20s were never going to be released from prison, and this project and the administration’s willingness to — at least for the people that meet the criteria — consider releasing people who would otherwise look to die in prison, when someone is released it’s just a wonderful thing to be able to help someone like that,” Ogilvy said.

For law students, Ogilvy said working on clemency entails the kind of experience that law students should attain in order to gain a better sense of what they will have to do as lawyers.

“I think, from my perspective, it gives the students the kind of full range of lawyering experiences that they can expect when they’re in practice,” Ogilvy said. “Even if they never intend to practice criminal law, they have the opportunity to do client interviewing and, in some cases, client counseling, and they have the ability to do fact investigation, legal writing, research. So it’s a full range of lawyering skills.”

McDonald was one of two federal inmates who had their sentences commuted thanks in part to the clemency project at CUA. The other was Sherman Dionne Chester, of St. Petersburg, Florida, who had been sentenced to life in prison in 1994 for a series of cocaine and heroin charges.

Like McDonald, Chester is also set to be released in December 2016.

Before he had his sentence commuted, McDonald was part of an uncommon lot — he was one of between 200 and 300 federal defendants who had been sentenced to life in prison each year between 2004 and the 2010, when the Fair Sentencing Act was passed. Since then, the number has been at or under 200 and has shown a downward trend, according to “Life Sentences in the Federal System,” a 2015 report of the U.S. Sentencing Commission.

In fiscal 2013, for instance, 153 offenders were sentenced to life in prison, and another 168 were given sentences so long that they were practically a life sentence, the report says, noting that, taken together, such offenders represent about 0.4 percent of all offenders sentenced that year.

Conte said that, while she is happy to have played a part in securing McDonald’s freedom, the experience was also “bittersweet knowing that there are many deserving individuals still left with little hope at a second chance.”

“President Obama is now at 184 commutations,” Conte said. “Through Clemency Project alone, 33,000 federal inmates have sought relief from lengthy sentences. While many of them do not qualify through Clemency Project 2014, they still highlight the need to reduce sentencing disparity and eliminate mandatory minimums.”

Ogilvy said he was not sure if the Clemency Project would continue after the next American president is elected, but that the issue of clemency will remain a priority for the law school. If the next president isn’t interested in clemency, he said, the law school will likely devote its resources to clemency at the state level, most likely in Maryland, he said.

“There’s no shortage of people that we could help,” Ogilvy said.