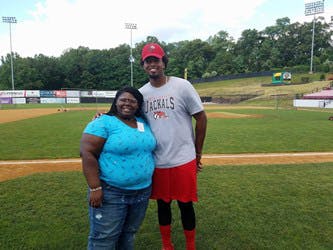 For the past three days, aspiring minority high school journalists from two urban cities in North Jersey got a first-hand account of what it feels like to be a reporter.

The Journalism Boot Camp is a new effort by Montclair State University’s School of Communication and Media to help diversify the news industry by getting students in their sophomore to senior year of high school interested in journalism before they get to college.

The School of Communication and Media, which was created four years ago and began offering a journalism major in 2014, recruited 16 students from the cities of Orange and Patterson, N.J., to participate in the tuition-free program.

Merrill Brown, the director of the school and a veteran media executive who helped launch MSNBC.com, said that the boot camp is the first in a series of ongoing efforts aimed at encouraging underrepresented students in the region to pursue careers in communication. The journalism initiative, he said, is a priority for the school.

“For starters, its an important public service, bringing together gifted educators and talented high school students who may not be in a position to afford ‘boot camp’ programs or other journalism summer efforts,” he said. “We’re also pleased to be in a position to serve students with an interest in journalism, especially at a point in time in which the students and their parents may be getting mixed signals about opportunities in the field.”

The high school students honed their reporting skills by learning from industry professionals. They traveled to New York City where they met with editors and reporters at ABC News and they also had a rare opportunity to interview members of the Cuban National Baseball team that was in the country this week to square off against the New Jersey Jackals at Yogi Berra Stadium on campus.

On campus, they took seminars focused on topics ranging from journalism ethics, field reporting and sports and entertainment journalism.

While summer journalism programs geared toward minority students interested in entering the news profession have been around for at least three decades, Montclair’s program is unique in that it caters to the diverse demographics of northern New Jersey, located just 15 miles outside the media capital of the world.

“We wanted to target the diverse cities in our immediate area,” said Kelly Whiteside, a veteran sports reporter who spent 14 years at USA Today, before she joined Montclair as an assistant professor of Sports Media and Journalism two years ago. “We want to sort of get them thinking about journalism and expose them to these skills. We feel like, even if they go to college and aren’t interested in media, the skills will carry over.”

But some of the students—all of whom spent the past few days living in campus dormitories and eating in the cafeteria—will likely matriculate into Montclair. And university officials see that as a good thing. Though the program is in its inaugural year, there are plans to expand recruiting efforts into other cities, such as Newark.

“This generation is digital natives,” Whiteside said, adding that teaching them how to be multimedia journalists was fairly easy in an era when they’ve grown up with social media and camera phones. “It was pretty intuitive for them.”

Hannah Nzedinma, 17, a senior at Orange High School, said that she welcomed the opportunity to handle the sophisticated camera equipment and practice voice overs in the radio studio.

“I’ve learned a lot,” said Nzedinma, who is interested in majoring in film and believes that a journalism background will help her to pursue her long-term goals. “The people that we’ve met have been incredible, and I feel like I’ve really developed some great skills.”

You can view the students’ work by visiting https://medium.com/msujournalism.