Dr. Kirk Nooks, Gordon State College’s new president, spent his first 100 days in office not teaching, but learning as much as he can about the institution and the student body it serves.

Nooks, who assumed his role on June 1, spent the first three weeks of classes living among students in a first-floor room in the Commons B dormitory.

“That gave me an opportunity in an informal setting to meet with students from time-to-time,” he said. “They provided unfiltered feedback; whether it was 8 o’clock in the morning as I’m walking out to meetings or whether it was at 10:30 or 11 o’clock at night when they’re just coming alive to hang out and relax.” 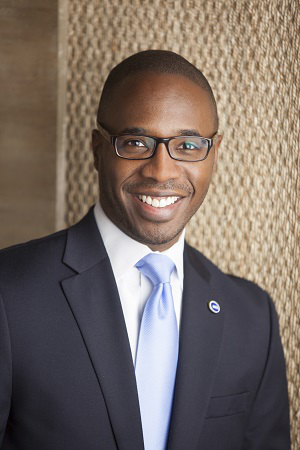 “For faculty and staff, this action on the president’s part showed his words were not empty, but he is truly committed to the students’ experience,” Knighton said. “I have personally heard from students how ‘cool’ it was that the president was actually in a room on their floor and they could simply knock on his door and he would invite them in,” Knighton said of Nooks, who is the fourth president of Gordon—a public college that joined the University System of Georgia in 1972.

Nooks’ new role at the Barnesville, Georgia school brings him back to the university system. Earlier in his career, he served as campus dean and executive liaison for diversity at Georgia Highlands College before assuming teaching and administrative posts at Northern Virginia Community College and Prince George’s Community College.

From 2013 until his appointment earlier this year, Nooks was president of Metropolitan Community College (MCC)-Longview in Lee’s Summit, Missouri.

“I wanted to come here to learn what was already being done; to learn about the people and about their dreams and aspirations and to start crafting a vision to see what would fit and what would work at Gordon State,” said Nooks, a rising star among college presidents.

In his first weeks on the job, Nooks worked with the Student Government Association to host a series of town hall meetings, where he learned that students wanted more opportunities to engage in activities during the week and on the weekends.

Taking that feedback into account, Nooks said that he worked with staff to expand the hours at the Student Activity and Recreation Center (SARC).

“Just this past week we announced that we are going to have homecoming and that’s going to be scheduled for February,” he said. “There’s excitement in the air because this is something they’ve been interested in.”

At the request of students, Nooks said that his administration will also study the feasibility of Greek life and football on campus.

“One of Dr. Nooks’ consistent messages to the entire campus is that the only reason we are here is for students,” said Knighton.

Goals beyond the first 100 days include graduating more students and increasing enrollment.

Right now, the student body is about 3,700, down from about 5,000, not too long ago. Nooks said that although he would like the student population to increase, he realizes that there are outside factors, such as the economy, that affect enrollment.

In his first few months on the job, Nooks said he has leaned heavily on his faculty.

“They are, to me, true role models of the academic enterprise.”

In addition to the Student Success Summit that he hosted on Aug. 1., where staff and faculty reviewed institutional data over the past several years, Nooks has presided over listening sessions where he solicits feedback from faculty who recently completed a survey about their perceptions of the college.

“It’s getting a qualitative perspective on quantitative data,” he said.

Nooks said that he has plans later this month for a “Data Day” where academic leadership and faculty can strategize over ways to enhance data points and then fold them into the strategic plan which they will begin to work on in December.

Knighton said Nooks trusts the leaders who report to him to perform at a high level of excellence.

“As the provost, I appreciate this level of trust and am honored to serve with him to move our institution forward,” said Knighton.

An advocate for shared governance, Jan Rog, an MCC-Longview faculty member in its English department, worked with Nooks during his tenure as president there and recalls how genuinely interested he was in the people around him, no matter their background or experiences.

“Dr. Nooks affirms and appreciates the great diversity of those around him” said Rog. “I observed how he would always take time to focus on the person directly before him, and he consistently showed genuine interest and concern for the individuals affected by larger social movements.”

For Nooks, higher education is an opportunity to forge meaningful relationships both on and off campus.