cmaadmin (EDU)
Mar 13, 2019
LaShonda Horrison-Gurley said she “didn’t know whether to laugh, to cry or break out in a praise dance” when she successfully defended her dissertation last week, but the doctor of education earner knew she was grateful for critical support along the way – including from a social media group created two years ago to support Black and first-generation students seeking doctoral degrees.

That’s why Horrison-Gurley, in the tradition of others before her, shared her good news with the more than 12,100 members of PhinisheD/FinishEdD, a Facebook group page launched in January 2017 by Dr. Daniel Jean, executive director of the Educational Opportunity Fund Program and Academic Development at Montclair State University. 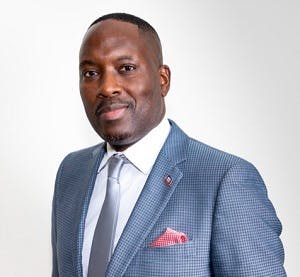 The road to earning a doctor of education or a doctor of philosophy is arduous, a journey on which “you need support, you need encouragement,” said Horrison-Gurley, a wife and mother of three who once stopped out of her education leadership and management program at Capella University due to family issues and felt like giving up near the end because of financial challenges and programmatic policy changes.

“I ran across the Facebook page on somebody else’s profile about a year and a half ago and decided to check it out, and joined,” said Horrison-Gurley, who works as director of multicultural development and a deputy Title IX coordinator at Ohio Northern University. “I’m a first-generation, and nobody else in my family has navigated this before. And going to school online is a different journey from brick and mortar. I felt I wasn’t alone, having that support group there rooting me on to finish.”

In that regard, PhinisheD/FinishEdD is doing exactly what Jean envisioned. Although primarily intended for doctoral-degree seekers and holders who are people of color or first-generation, the private page has members from various ethnic groups in countries beyond the United States, including Canada, China, Nigeria, the United Kingdom and United Arab Emirates. About 70 percent are women.

“I noticed others using Facebook as a toy, not a tool,” said Jean. “I set it up as a motivation and resource page, and by the end of the first month I had 1,000 members. I started updating it more and posting pictures, and it just took off and has become an unbelievable network that helps people stay on task and be motivated.”

The page is a forum for soliciting and offering specific advice, seeking and providing encouragement and celebrating milestones up to and through degree completion. As added motivation, new graduates usually tag #WhoGotNext when posting their picture and announcement.

Observing need and growing demand for support among doctoral students, Jean expanded the mission of PhinisheD/FinishEdD to include a summit for doctoral students each semester. The next one, March 30 in New York City, is on track to have 100 attendees, quadrupling attendance last fall, he said. 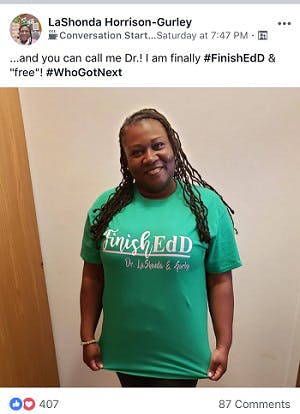 Jean, the U.S.-born child of Haitian immigrants, attended a magnet school in New Jersey. When he was in the eighth grade, his father died and his grades plummeted.

But thanks to a program for low-income, highly motivated students – the very program he now directs – Jean eventually got his groove back and earned a bachelor’s degree in public communications at Ramapo College of New Jersey and a master’s degree in higher education counseling at Montclair State University.

He decided to earn a doctoral degree, and credits participation in a conference for minority doctoral students through SREB as a tremendous support. That experience inspired him to create new pathways to doctoral degrees for underrepresented students like him, including his first doctoral summit at Montclair State in fall 2016.

Jean has given more than 600 keynote speeches, presentations and trainings across the nation, primarily for graduate students. His mission, he said, is inspired by Dr. Ansley Abraham and Abraham’s work as founding director of the Southern Regional Education Board (SREB) State Doctoral Scholars Program in Atlanta.

Now in its 26th year, the program presents various initiatives, including hosting the largest gathering of minority doctoral students in the nation. It has directly supported nearly 1,700 scholars, with about 80 percent of its nearly 1,000 graduates working in education, said Abraham.

Those alums include Jean, whose passion and efforts to create diverse communities of scholars and increase inclusion in academia were praised by Abraham.

“I love what he’s doing,” said Abraham. “We need a whole lot more Daniel Jeans out there, understanding what the issues are and really trying to push this system in a way it’s not used to being pushed. He’s been very, very successful.”

Dr. Renetta Garrison Tull, associate vice provost for strategic initiatives in the graduate school of University of Maryland Baltimore County’s College of Engineering and Information Technology, met Jean at an SREB conference. She was so impressed with his presentation that the school began bringing him to campus for mentoring in residence and other initiatives.

His innovative methods of mentoring were so helpful at the graduate level that the university has had him also work with undergraduates, she said.