Democrats in Congress Question DeVos on Relief For Defrauded Students

Tensions ran high at a House Education and Labor Committee hearing on Thursday, where Democrats questioned U.S. Secretary of Education Betsy DeVos about her implementation of the borrower’s defense rule, the provision that allows loan forgiveness for defrauded students. 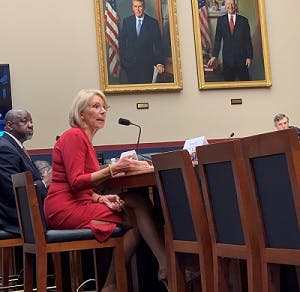 The hearing is a part of an ongoing saga over what will happen to student borrowers who attended for-profit colleges that misled them about school services or the value of their degrees.

Democrats have criticized DeVos for failing to process defrauded students’ claims over an 18-month period, with more than 240,000 claims pending. Former students from Corinthian Colleges sued DeVos over their delayed loan repayments, and in October, she was held in contempt of court for mistakenly continuing to collect on loan payments against a court order. In November, the House Education and Labor Committee asked DeVos to testify, and when she indicated she wouldn’t attend the hearing, Rep. Robert “Bobby” Scott, the committee’s chairman, threatened a subpoena.

“Defrauded borrowers have been cheated twice: First by their college, and then by a Department of Education that refuses to make them whole,” Scott said.

Committee Democrats blasted DeVos for leaving students from fraudulent or now-defunct schools in financial hardship, especially in light of memos shared by National Public Radio on Wednesday, which showed that career staff from the department’s borrower defense unit advised full loan forgiveness after reviewing cases. While the memos were technically under the Obama administration, they came weeks before DeVos stepped into her role.

DeVos blamed the Obama administration for the backlog of cases, arguing that “there was no process in place” to assess the validity of students’ claims. She also stressed her obligation to not only students but taxpayers.

“If claims are false or if students didn’t suffer financial harm, then hardworking taxpayers, including those who scraped and saved to faithfully pay their own students loans, should not have to pay somebody else’s student loans too,” DeVos said. “It’s a matter of fairness.” 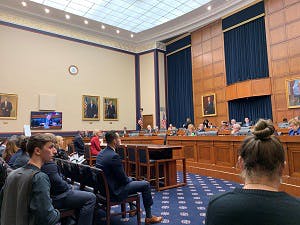 Much of the questioning focused on DeVos’s new methodology to offer partial relief to borrowers, a plan she released earlier this week. Her formula will base the amount of loan forgiveness on how the wages of defrauded students from a particular program compare to graduates from similar programs. Her first partial relief plan was thrown out by the courts for using Social Security earnings data, a decision the Department of Education has appealed.

Democrats sparred with DeVos over partial versus full loan forgiveness, repeatedly bringing up the stories of constituents who are struggling, defrauded students.

“There’s literally no other consumer protection that does not restore full repayment of a fraudulent product,” said Rep. Susan Davis.

Or as Rep. Suzanne Bonamici put it, the plan implies “if you’re making money, you’re not defrauded – that’s not justice.”

DeVos admitted she was “frustrated” by the buildup of claims and that the department collected payment on loans from Corinthian Colleges students in error.

“Human beings made mistakes,” she said. “As soon as we became aware of it, we acknowledged it and said we will correct the issue.”

But she was reluctant to call out for-profit schools for fraud. She argued that the Obama administration “weaponized” the borrower’s defense rules “against schools it simply didn’t like” and said that she was sure some students got value out of attending Corinthian Colleges.

This prompted an exasperated response from Rep. Andy Levin, who accused her of going “to the ends of the earth” to defend predatory for-profit schools, after describing how Corinthian Colleges posted fake accreditation documents on campus to reassure students before the chain closed.

Throughout the hearing, Republicans and Democrats squabbled over decorum with barbed and sometimes personal remarks directed at DeVos.

Rep. Frederica Wilson, for example, called DeVos “the most unpopular person in our government.”

“I’ve had some honest disagreements with my friends in the Republican party about how to move education forward, but I’ve never not one time thought they were out to destroy public education until I met you,” Wilson said. “Why has every decision you’ve made harmed students instead of empowering them?”

Democrats also harshly criticized DeVos for claiming to have not read the memos reported by National Public Radio before coming to the hearing.

“Did you not know you were coming here today?” asked Rep. Jahana Hayes.

DeVos described the conversation around borrower’s defense as “circus-like.”

Democrats also said that the students impacted by predatory for-profit colleges and waiting on loan forgiveness are often the most vulnerable, like low-income students and veterans.

For example, Rep. Joseph Morelle pointed out that the department’s focus on arming students with information about schools via the College Scorecard – versus accreditation oversight and student loan forgiveness – puts the onus on students to avoid fraud instead of protecting them.

“It seems hard to me as just an average citizen that you would put the burden on individuals looking to go to school, and these are in often cases non-traditional students,” he said.