Soon after the Apollo missions returned to earth, the United States parceled pieces of moonrock to countries around the globe as a gesture of goodwill. By chance or by fate, some of those pieces landed at a consulate in India, where a nine-year-old Sethuraman Panchanathan marveled at them with his father, an astrophysicist and professor.

Today, Dr. Panchanathan is best known as the 15th director of the U.S. National Science Foundation. 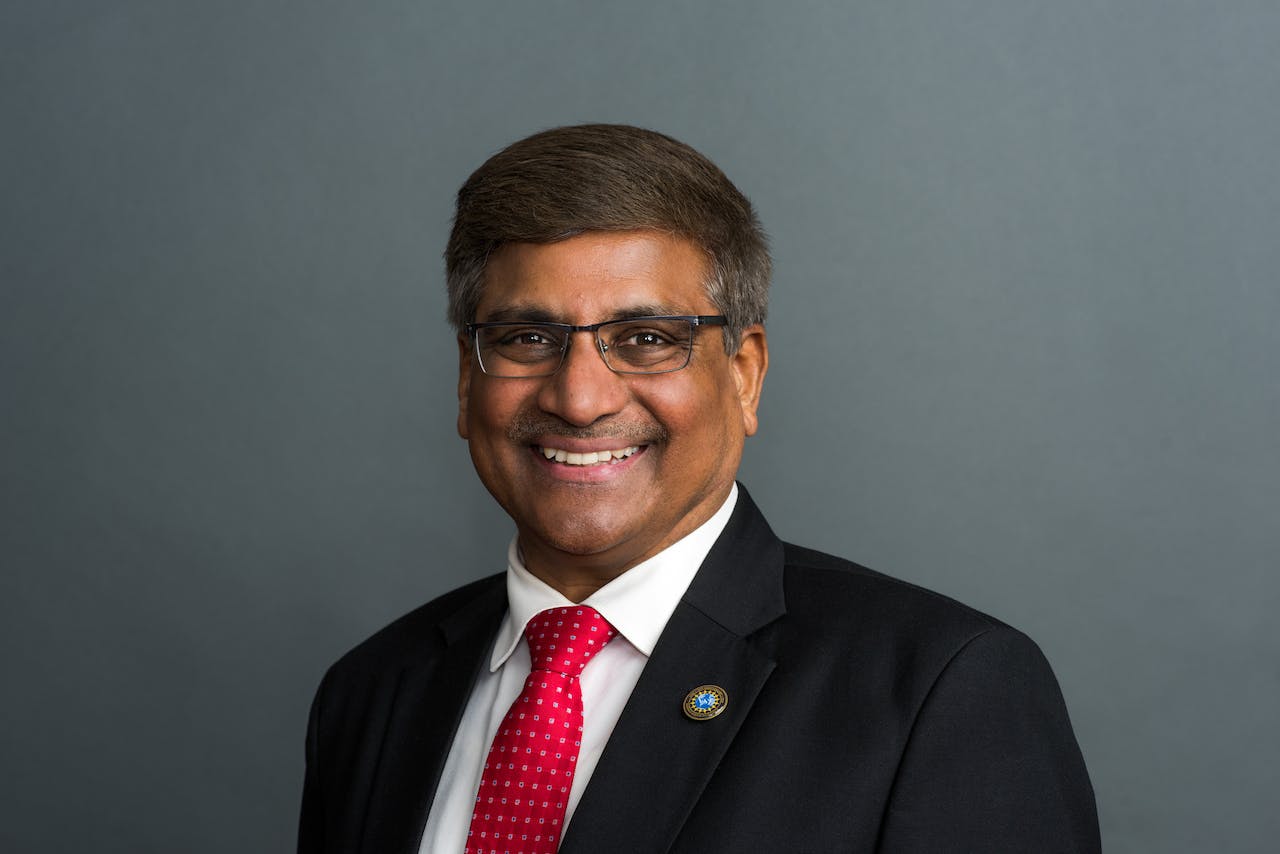 Dr. Sethuraman Panchanathan“Every day my father was inspired and enthused by science and what it can do for humanity,” says Panchanathan — who goes by “Panch” — of his upbringing in Chennai, India. “When he took me to see [the moonrock], it made me so excited about what exploration truly was and how one could have achieved it. ... I saw that things could be made possible by consistent effort and dedication.”

“Making things possible” could very well be a motto of the U.S. National Science Foundation (NSF), which funds approximately 25% of all federally supported research at U.S. colleges and universities. In fact, the foundation is the major source of federal backing in fields such as mathematics, computer science, economics and social sciences.

Appointed by former President Donald Trump to lead the $8.5 billion independent federal agency in 2019, Panchanathan was unanimously confirmed by the Senate in June 2020 — a particularly heated month amid a year marked by an ongoing pandemic, racial strife and distrust of public and scientific authorities.

Yet, despite taking on the position during a tumultuous era, Panchanathan still speaks with the same optimism toward science that he describes having as a child. It’s through science, he insists, that we can unlock solutions to major issues confronting humanity.

That belief has been the impetus behind his own research at Arizona State University (ASU), where he is a tenured professor — currently on extended leave for his six-year term at NSF — and has held various leadership positions within the past two decades. With a Ph.D. in electrical and computer engineering, Panchanathan has devoted much of his time to exploring how machines can help people with disabilities, specifically those who are visually impaired.

He founded the university’s Center for Cognitive Ubiquitous Computing (CUbiC) which remains dedicated to developing assistive and rehabilitative technologies for individuals with disabilities. Using an interdisciplinary approach to its efforts, the center develops technologies that address an array of challenges, such as helping visually impaired people read body language and improving the intelligibility of speech that’s been impacted by a neurological disorder.

“By bringing together a group of people from engineering, from science, from accessible education, from 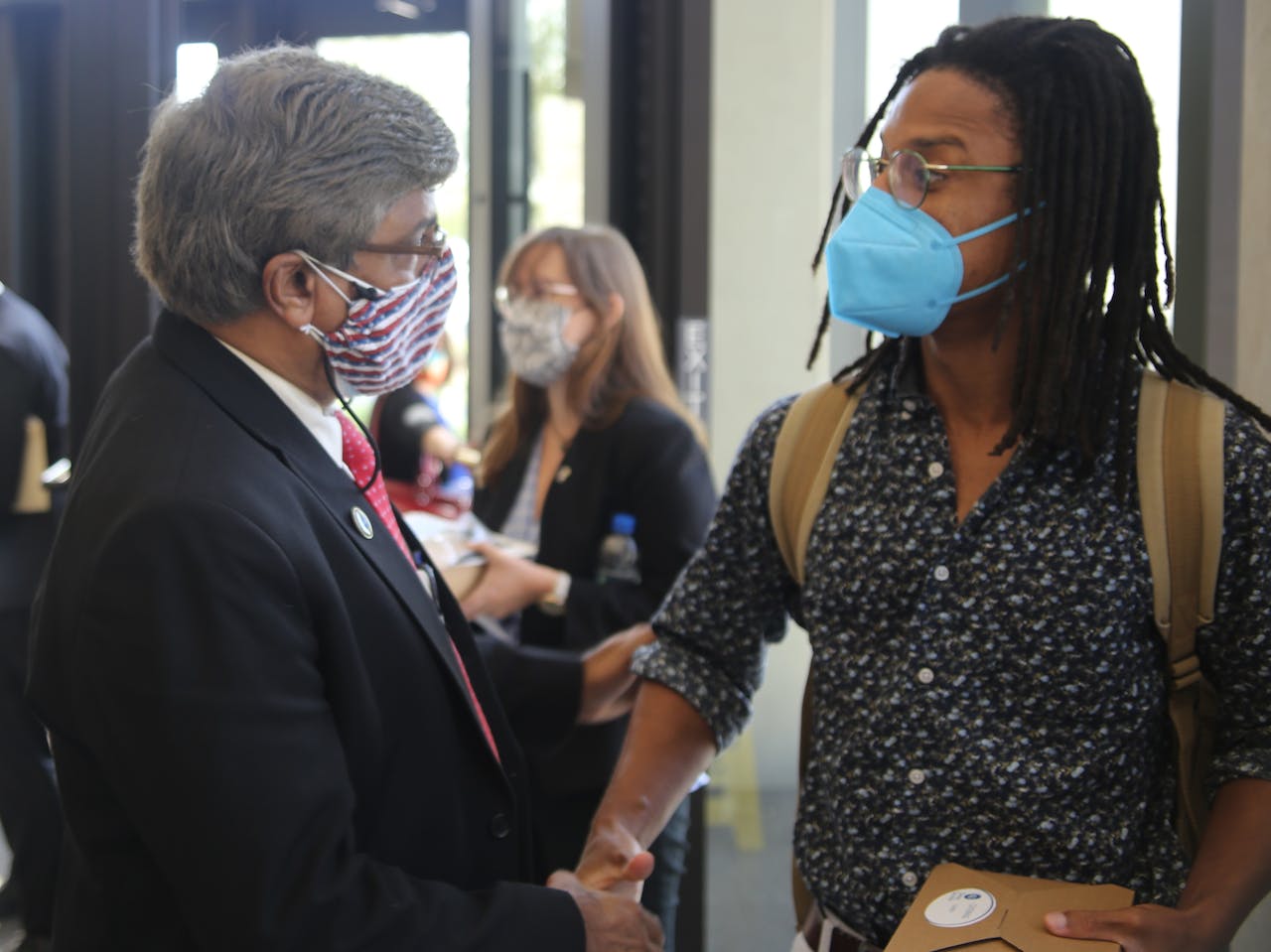 NSF Director Sethuraman Panchanathan greets University of Kansas Ecology and Evolutionary Biology Assistant Professor Brian AtkinsonRylie Koester, University of Kansas Office of Research business and from design, we are working together to find comprehensive solutions,” says Panchanathan, who holds four patents, has published close to 500 articles and has received numerous awards for his scientific contributions.

In other words, it’s research for society’s sake, and he’s taken that mindset with him to the NSF.

“I’ve started to imagine the DNA of the NSF like this,” he says, describing the double helix pattern of the molecule. “One strand of the DNA is curiosity-driven, exploratory research. That’s something that has been done everywhere and has made possible fundamental discoveries,” such as discovering black holes or the basics of artificial intelligence.

The other strand, he says “is use-inspired, solutions-focused, translational research and innovation. To me, these two are highly intertwined.”

He says the NSF is paying special attention to research that not only has scientific merit but broader societal impact. By funding such research, he hopes to see the agency encourage scientific innovation that can address major challenges confronting artificial intelligence, disaster response, agriculture, biotechnology and cybersecurity, among other areas.

In describing his vision for the agency, Panchanathan consistently stresses diversity. And, for him, that includes the broadest definition of the word: diversity of class, race, culture, gender, geography and academic disciplines. Having researchers with a wide breadth of perspectives and backgrounds, he says, is key if the U.S. wants to remain a global leader of science.

“We need to see how we can reach the amazing domestic talent that we have in different rural, urban, socioeconomic demographics,” he says. “How can we ensure that we double or triple African American technology talent? Quadruple Native American talent?”

He often refers to those demographics as “the missing millions” — people who are capable of succeeding in science but lack accessible pathways into STEM. One way NSF has been working on building those pathways is through its INCLUDES initiative, which works to boost inclusivity in STEM by forming alliances between public and private organizations throughout the nation and by funding research related to advancing diversity. In early August, the foundation invested an extra $50 million to establish five new INCLUDES Alliances.

But aside from cultivating domestic talent, Panchanathan also emphasizes the importance of attracting the talents of international students to the U.S. He, after all, is a prime example of such talent. Drawn by the information and technology revolution taking place in the ’90s, Panchanathan speaks with a fierce love for the country he’s built his career in. The American dream, to this self-described “eternal optimist,” is still possible — but it’s a dream he’s hoping to make ever more accessible.

After being named director of the NSF, “I felt so thrilled that I would be able to give back all that I’ve been given in terms of the opportunity in this amazing nation. I often talk about how this is the land of innovation and democracy,” he says. “This nation has given me so much, so now it’s time for me to serve and see how I can give back. … That’s why I’m deeply, deeply, deeply committed to ensuring accessibility and inclusion.”