“You didn’t know you were [talking] to a former jailbird, did you?” says Dr. Orlando L. Taylor with a hearty laugh. Currently vice president for strategic initiatives and research at Fielding Graduate University, he seemed thoroughly amused that among his esteemed titles — university administrator, scholar, pioneer in communications studies, advocate for women and Blacks in graduate education — he could count one that would seem absurd to anyone who’d ever met him.

Or perhaps it wouldn’t.

In 1969, Taylor had just given up his position as an assistant professor of communication at Indiana University (IU) — he was the university’s first Black tenure-track professor and only one of three Blacks on the faculty at the time — to assume the role of the university’s first-ever vice president of minority affairs. He was sitting in a faculty senate meeting when a group of Black students burst in to protest race relations on campus. The Bloomington Nine, as they were called, took everyone in attendance hostage. 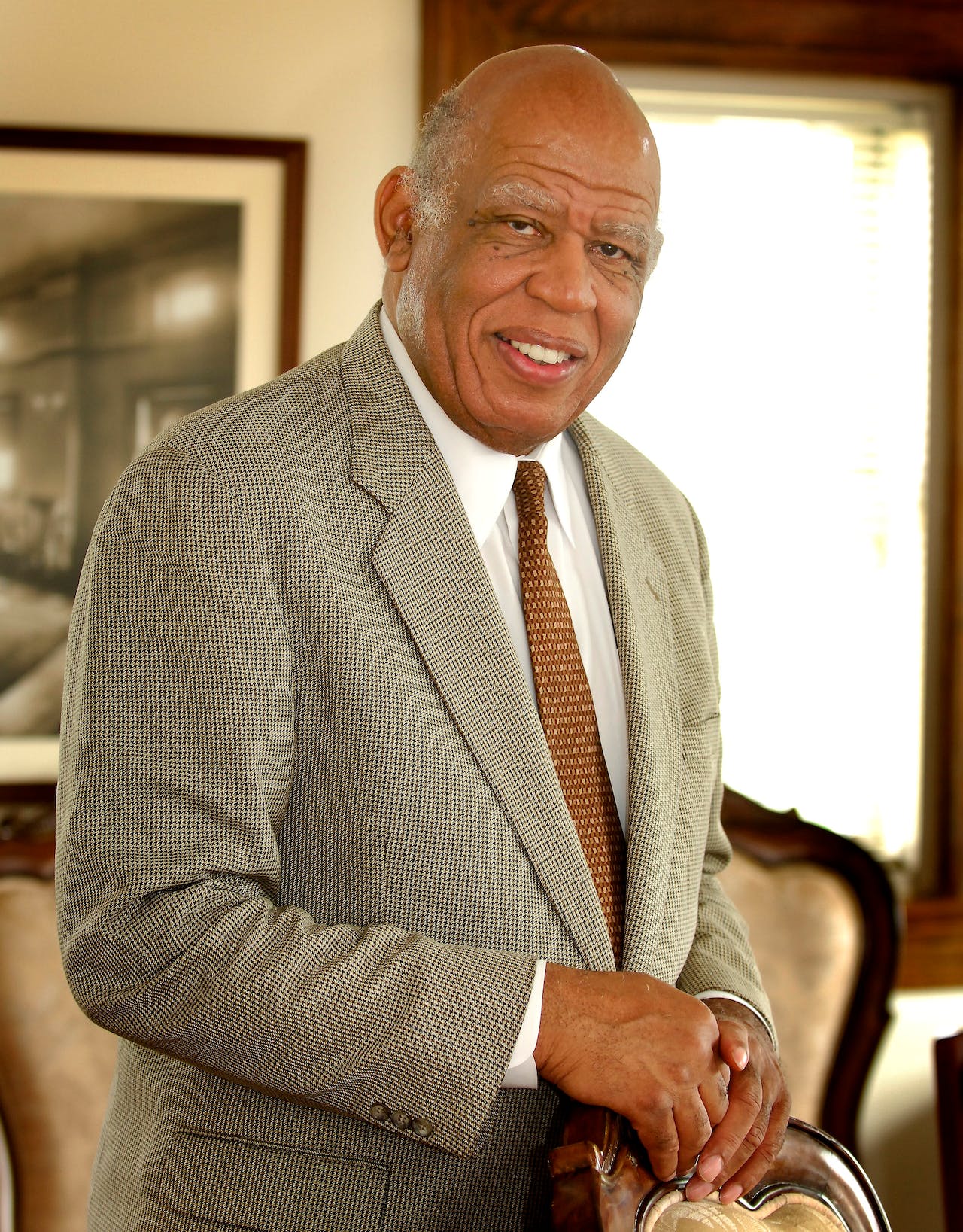 Taylor became their de facto advisor as they pushed university leaders to address the racial climate at IU. After three days of negotiations, a grand jury indicted Taylor and the nine students for conspiracy to take over the university. The university rescinded the offer to Taylor and he went to jail. When faculty members bailed out the students and bailed him out a few days later, Taylor was unemployed. He’d given up his faculty position to accept the VP role that wouldn’t be.

“(Taylor) stood up against racial hostility in 1969 at the cost of his position at IU early in what has turned out to be a truly remarkable career,” said Robert L. Ivie, professor emeritus of communication and culture at IU Bloomington, in a statement released by the university honoring Taylor ahead of his receipt of an honorary Doctor of Humane Letters degree in 2007.

“That’s just what he does,” says Dr. Kelly Mack, who currently serves as vice president for undergraduate STEM education and executive director of Project Kaleidoscope at the Association of American Colleges and Universities. “And anyone who’s ever known — meaning worked for — Dr. Taylor knows this well. Sacrifice of self, autonomy and excellence are the expectations, and you only achieve them through the indefatigable and unremitting work that Frederick Douglass talked about decades ago.”

To this day, Taylor “is as accessible to his thousands of graduates and students as he is to his higher education peers,” says Dr. Antoine M. Garibaldi, president of the University of Detroit Mercy, who has known Taylor for more than 40 years.

Making the move to D.C.

Taylor landed in the nation’s capital in 1969 after leaving IU, first serving on the faculty at Federal City College (now the University of the District of Columbia). Four years later, he joined the faculty of Howard University, where he would finish his tenure as dean of the School of Communications, then dean of the Graduate School.

It is in graduate education where Taylor continues his legacy.

As an undergraduate at Hampton University in the 1950s, Taylor had the opportunity to participate in a domestic exchange program that sent him to Denison University in Ohio. Taylor was one of only three Black students on campus — there was a Black woman from Morgan College (now Morgan State University) and one Black student who was enrolled at Denison as home institution. The three got together in their first week on campus and agreed not to hang out — they didn’t want to be re-segregated as a result of their choosing to socialize with each other.

“I’d only gone to segregated schools in my lifetime,” says Taylor. “Having grown up in the segregated South, I always wanted to know if I would compete favorably with White citizens.”

At Denison, Taylor says, “I learned two important things: First, I knew I could compete. Actually, I got better grades there than I did at Hampton. Then I learned that they were all going to graduate school. All of them. That wasn’t a conversation that was being had at Hampton.”

Taylor returned to Hampton determined to go to graduate school. He graduated in 1957 and went on to earn a master’s degree from Indiana University at Bloomington, then a Ph.D. at the University of Michigan. He returned to IU to teach, but says he eventually grew frustrated with the fact that he wasn’t seeing many on the faculty who looked like him and wasn’t having the impact on Black students he wanted to have — especially those from historically Black colleges and universities — whom he wanted to help get Ph.D.s and enter academia in higher numbers.

“I’ve mainly focused my career in graduate education and mainly doctoral education … because I understand that the doctorate … is about producing individuals who will expand the frontiers of knowledge through their research,” Taylor says.

“I think there’s so many issues and questions that are in need of research through the lens of people of color — I wanted to be a contributor to that. And I also knew in order to raise the number of African Americans and people of color who picked up that torch and carried it, that would be enhanced by having more faculty of color. But we’ll never achieve that goal unless we produce more people with Ph.D.s who can join faculties.”

Supporting Black women in the academy

Taylor believes that there’s also far too little representation of Black women in the conversations that matter.

“Unfortunately, there’s not been a large vocal advocacy for Black women in education. There’s a lot for Black men, but the marginalization of African American women is a significant issue,” he says.  “Too much research comes through a Eurocentric, male-centric lens.”

Mack can attest. She met Taylor when she was at what she describes as a low point in her career and credits him for helping her to develop as an individual and as a professional.

“I approached then-Dean Taylor and challenged him to do for me, as an alumna of Howard’s Graduate School, what I had seen him do for so many students: Help me,” Mack says. “After a few conversations, he put me to work.”

Taylor had Mack accompany him to a small, invitation-only conference on Capitol Hill. Mack recalls feeling incredibly self-conscious — she had never been to Capitol Hill, not even on a school field trip, she says. Everyone seemed to know everyone else, including Taylor, whom Mack describes as never having “enter[ed] a room that wasn’t filled with all of his best friends.”

“As each panelist started to introduce themselves and describe their academic pedigrees, out of nowhere, he leaned over and quietly and convincingly said to me, ‘there’s no one up there who is smarter than you.’ And, in that very moment, I grew. In faith. In myself,” she remembers fondly.

Today, Taylor’s work focuses primarily on STEM education; the psychologist and linguist by training says too many people neglect the importance of the social sciences in the conversation about STEM, noting the importance of connecting science through a social framework. He continues his work to get more people of color — especially those from historically Black colleges and universities – into leadership positions in STEM. With Mack, he co-founded the Center for the Advancement of STEM Leadership to help advance representation in the sciences.

In the words of Garibaldi, “He is a prolific scholar in his academic discipline and on many higher education themes, as well as the author of numerous government and philanthropic grants. Even more, he is a wonderful professional colleague and consummate educator.”

But none of his titles describe him adequately, as anyone who has ever known him will agree.

“Over the years I’ve heard people use many words to describe him: gentleman, noble, kind, true friend, legend, champion, consummate dean, dean of deans, the voice, illuminati, HBCU ambassador, life saver,” Mack says. “It’s actually hard to tell which of these he’s most proud of because humble is actually the word that likely describes him most.”