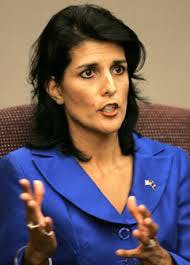 South Carolina Gov. Nikki Haley, who chairs the board, said it needed to do something immediately to give confidence to the schools accreditors, students and parents.

COLUMBIA, S.C. ― The Budget and Control Board on Wednesday approved a $6 million loan to keep South Carolina State University afloat for the rest of the school year, but how it continues to operate after that remains questionable.

S.C. State President Thomas Elzey called the 3-1 vote a lifeline for the state’s only public historically Black university. He had requested nearly $14 million to pay bills that began piling up last fall.

The loan “will help us continue to tread water,” said Elzey, who took the school’s helm last June. “We want to be able to rise out of the water.”

The loan allows the university to pay its oldest bills while others will continue to go unpaid as school officials seek money from the Legislature.

Gov. Nikki Haley, who chairs the board, said it needed to do something immediately to give confidence to the schools accreditors, students and parents.

“This is extremely symbolic in terms of what we do today,” she said. “By the time the Legislature is able to do something, every one of these vendors will start to give up on South Carolina State. We need enrollment to go up. What parent is going to send their child to a school we won’t even let pay their bills?”

The resolution calls for the university to pay back the money by July 2015. But how it will repay the money remains unclear. Up to $500,000 of the loan must be spent on financial consultants. Most of the rest will go to two companies. As of March 31, the school owed nearly $4.8 million to its food vendor and $2.4 million to its maintenance contractor ― items Haley called essential for students. Other bills that are at least four months past due tallied $1.1 million.

Haley said she’s worried S.C. State will lose its accreditation, saying “we won’t be able to recover” if that happens. The Southern Association of Colleges and Schools put the university on warning last summer, due to its financial instability and governance issues. A decision is expected in late June, Elzey said.

Senate Finance Chairman Hugh Leatherman voted against the plan, saying it does not solve anything. He has put together a group of five current and former presidents of South Carolina’s public colleges to dig into the school’s finances and work with S.C. State officials on a plan to get the school solvent.

“I don’t know what the issues are down there. I’m not sure anyone knows quite what the deficit is,” said Leatherman, R-Florence. “We’ve got an institution that’s bleeding to death, and a Band-Aid is not going to solve the problem.”

Haley intends her plan as a bridge until the Legislature passes a budget for the fiscal year beginning July 1. But Leatherman said it’s unrealistic to expect the Legislature to pass a bailout plan in the legislative session’s five remaining weeks.

“That’s just not going to happen,” he said. “How does this university operate past July 1 if all we’re doing is getting them to July 1? We’ll be right back to where we are.”

“I’m to the point something has to be done now to ensure it doesn’t fail so we can get to a long-term solution,” said White, R-Anderson. “You’re got to have some triage to get to the ER.”

Haley called the group Leatherman put together stellar but declined to back the college presidents’ efforts.

“They’ve got your blessing, and in this state, that’s pretty good,” Treasurer Curtis Loftis told Leatherman.