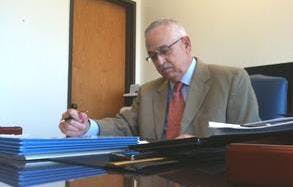 Author Joiner, who sued over the decision not to retain Chancellor James Llorens, argues that, because he is a student at Southern, he will be substantially impacted by the board’s decision.

BATON ROUGE, La. ― A state judge Monday threw out a lawsuit filed by Southern University student Author Joiner who sued the school for refusing to renew its contract with Chancellor James Llorens.

The Advocate reports Caldwell ruled that Joiner, who’s also a Baton Rouge lawyer, is “little more than an interested bystander” and had no right to sue the school’s supervisory board.

The board voted 9-6 on Feb. 8 not to renew Llorens’ contract. The board then voted 8-7 on Feb. 24 against extending the contract for a year. The board’s decision to let Llorens walk was met with an outcry from Llorens’ supporters and students who organized a rally, circulated an online petition and staged a sit-in.

Joiner, a Southern Law School alumnus now pursuing a master’s degree in business administration at Southern, contends the Board of Supervisors breached Llorens’ contract by not dealing fairly with the chancellor.

Decuir argued Monday that the contract is between the board and Llorens.

“(Joiner) hasn’t shown how he has a real legal interest,” Decuir told Caldwell.

Joiner countered that, because he is a student at Southern, he will be substantially impacted by the board’s decision.

“I am an MBA student at Southern. Anything Southern does affects by prospect at employment,” he argued. “I’m a student. I’m affected.”

Caldwell acknowledged that Joiner has valid and passionate concerns for Southern but said Joiner has no legal foot to stand on.

“He has no real, legal interest in this case,” the judge said.

Joiner, 60, said outside Caldwell’s courtroom that his fight is probably not over.

“More than likely I will appeal,” he said. “I love my school.”

Joiner said he believes Llorens has done a great job at Southern and that it is in the school’s best interest that he remains as chancellor of Southern’s Baton Rouge campus.