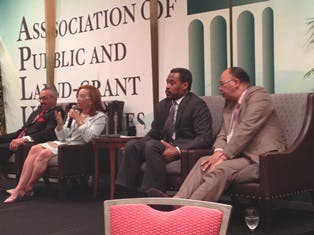 “The problem with our students is that they don’t go far enough,” said Erroll B. Davis Jr., the outgoing superintendent of Atlanta’s 48,400 person school district.

Of the 59 percent of Atlanta’s high school students who graduate each year, for example, only 35 percent enroll in college and about 17 percent of those students return to campus for their second year.

“Not only are we not doing enough,” he told attendees at the 2014 HBCU Student Success Summit sponsored by the Association of Public and Land-Grant Universities, “but it may indicate that we don’t know what we’re doing.”

That kind of tough talk from the former chancellor of the University System of Georgia is being echoed throughout the nation as the number of Black high school students attending college, and HBCUs in particular, continue to dwindle.

The numbers are even more dismal among Black boys who often go through much of their formative years in schools without ever being taught by a Black male teacher, said Davis, who added that among the 3,200 teachers in the Atlanta school system, only 566 are African-American males.

“Nationally the numbers are pathetic,” he added. “Black male teachers are invisible in our society.”

Of the 5 million public schools teachers in the United States, only 2 percent are Black males. Several years ago, Secretary of Education Arne Duncan announced a new initiative to recruit 80,000 African-American male teachers by next year, but its unclear if the Obama administration will meet the goal.

There has been more encouraging news on the local level.

In South Carolina, the Call Me Mister Program, headquartered at Clemson University, has had phenomenal success in recruiting, retaining and certifying African-American males to become school teachers, particularly at the elementary level, said Dr. Roy Jones, the executive director of the program that recently expanded into seven other states.

“People didn’t give us a snowball of a chance,” he said. “But we never felt recruitment was the issue if it was made a priority.”

Jones said that since the program launched in 2000, it has graduated 150 fully certified Black male teachers. Another 213 Black males are currently enrolled in teacher education programs at 18 colleges across South Carolina. Jones said that since 2004 all of the Black male teachers who graduated from the program have been retained as teachers and some have moved on to become school principals.

“These young men don’t come from AP [high school] programs,” he said. “We take students where they are and develop them.”

But in neighboring North Carolina, Dr. Debra Saunders-White, chancellor of North Carolina Central University, fears that it will become increasingly difficult to keep quality Black teachers in the wake of the state legislature’s attempts to undo teacher tenure.

“Our teachers are leaving our state in double digits,” said Saunders-White.

Absent good teachers who encourage high school students to consider enrolling in HBCUs, coupled with aggressive recruiting strategies by institutions to offer incentives for students to attend their school, the enrollment at some of the nation’s most storied Black colleges probably will continue to decline.

“Climate change is here in higher education,” said Dr. John Silvanus Wilson Jr., president of Morehouse College. Efforts by some HBCUs to focus primarily on recruiting non-Black students to their institutions is misguided, said Wilson, considering that only 8 percent of all African-American students attend an HBCU.

“If 92 percent of us are not at HBCUs, then a lot of African-Americans haven’t gotten the memo on HBCUs,” he said, adding that Morehouse has decided to aggressively target 700 Black males to enroll in next year’s freshmen class.

“There is a stereotype about HBCUs,” he said. “It used to be positive, but now it’s not all positive.”

And when students do enroll, many have to drop out due to the rising cost of a college education, said Dr. Carlton E. Brown, president of Clark Atlanta University.

“At Clark, the biggest retention issue is money,” he said. “Remove the money factor, and we’re at 80 percent retention from year to year.”

A Playbook to Help Colleges Students Across the Degree Finish Line

A Playbook to Help Colleges Students Across the Degree Finish Line