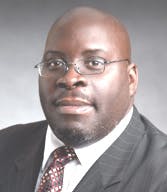 The trustees of the Ohio school had planned to announce Dwayne Smith as the school’s 20th president Saturday night at its annual alumni conference in Memphis, according to a person with first-hand knowledge of the process but was not authorized to speak publicly about it. Instead, alumni were told that the search committee would get back to them “at a later date.”

The committee had identified three candidates as finalists and had conducted a final round of interviews earlier this month. The finalists for the position were: Glenda Carter, executive vice president and provost of Wiley College in Marshall, Texas; Herman Felton, senior vice president, COO and vice president of institutional advancement at Livingstone College in Salisbury, N.C.; and Smith, vice president for academic affairs at Harris-Stowe State University in St. Louis, Mo.

Smith, who is considered an expert on diversity and multiculturalism, has a doctorate from the University of Missouri in educational leadership.

Whoever takes over at Wilberforce will have to address declining enrollment and financial and accreditation challenges. Only 70 freshmen enrolled at the university last fall, and 30 percent of them had dropped out by second semester. Its overall enrollment has dropped from more than 1,000 in the 1980s to a couple hundred currently.

Wilberforce has operated at a loss the last few years: $775,000 in fiscal 2011, $1.5 million in fiscal 2012, and about $1 million in fiscal 2013, according to a “show cause” letter issued by the Higher Learning Commission, which accredits colleges and universities in 19 Southwestern and Midwestern states. The school, founded in 1856 by Methodist clergy, must submit a viable turnaround plan to the HLC by December 15 in order to avoid loss of its accreditation and, with it, access to federal financial aid for its students.

Wilma Mishoe is serving as acting president at Wilberforce. She took over for Patricia Hardaway, who stepped down last December after four years in the position.

“While we recognize this situation as a crisis, we also accept its challenge,” Mishoe wrote recently in an open letter addressing the school’s issues. “We can even see a tremendous opportunity to re-invent our beloved Wilberforce University.”